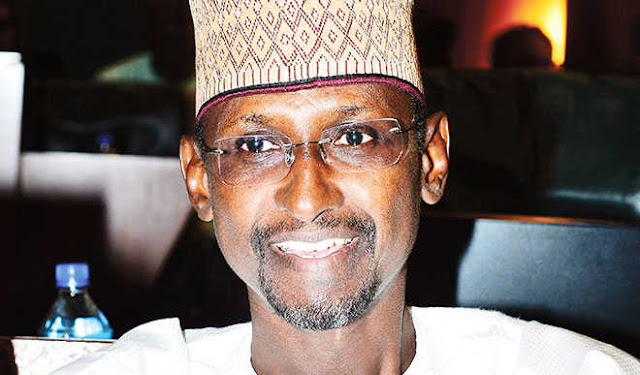 BY Hyellamada Bernard & Catherine Philip Jelani.
The Minister of the Federal Capital Territory Abuja, Mohammed Musa Bello has commended Governor Muhammad Umar Jibrilla for the developments going on in the state ranging from Roads, Hospitals, Schools among others.
Musa Bello made the commendation when he received a delegation on Bindow for Social Change (BSC) led by the Honourable Commissioner for Information, Comrade Ahmed Sajoh in his office in Abuja.

He said the advocacy visit embarked upon by the team will build more relationship between the Media and State Government particularly in keeping the public informed on the achievements of Government.
The FCT Minister promised to join hands with the Governor in moving the State forward saying as Adamawa citizen he will use his office to bring more Federal presence to the state.
The Commissioner for Information, Comrade Ahmed Sajoh had told the Minister that as a host of all Adamawa citizens visiting Abuja the team deemed it necessary to inform him on the developments going on in Adamawa State.
He explained to the minister that plans are on the way by state Government to organise a Town Hall Meeting with Adamawa indigenes based in Abuja where Governor Muhammad Umar Jibrilla will address people aimed at having a new Adamawa.
While calling for support of the Minister towards the success of the forum, Ahmed Sajoh believes that it will give people opportunity to contribute what they think will help in uniting the Adamawa people.