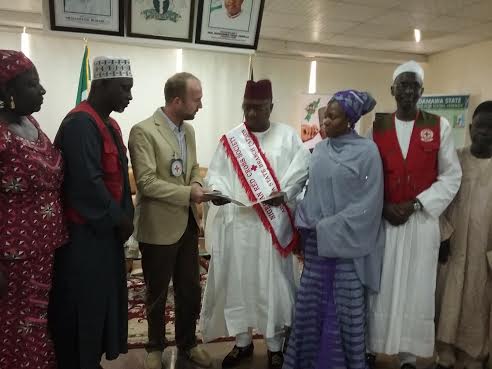 Governor Muhammed Umar Jibrilla  has been conferred   as State Patron of the Nigerian  Red Cross Society  Adamawa State  Branch.  While  decorating  the Governor  during  a courtesy call  at his office, The State Chairman of the  Red Cross Society  Alhaji  Mahmud Abubakar  said  the  society  had decided to  honour the Governor  for his emmence contribution to the development of Adamawa state  and service to humanity.

He explained that the  Red Cross society  has rendered  it's humanitarian  services  to the  victims of Bomb  explosion  at the  Jimeta Market, Malkohi IDPs  Camp, Jambutu Jummat Mosque, as well as  Gombi  and Madagali  grains  Markets, and responding to the  victims  at Yola Specialist Hospital and Federal Medical Center Yola  respectively. 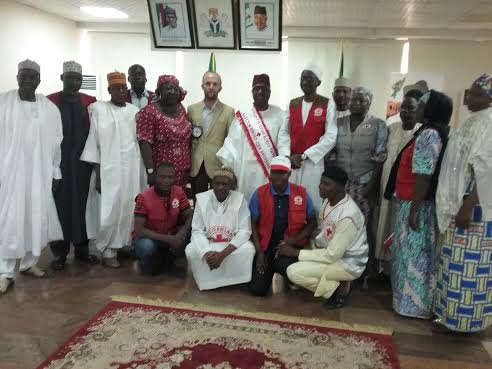 He also  pointed out that the society  has also  contributed it's quota  by sinking a number of  hand pump  bore  holes, rehabilitation of industrial bore holes  and installation of Solar power system and Clinic rehabilitation  support in Michika, Mubi-North and Mubi- South  Local government Areas.

Alhaji  Mahmud Abubakar also explained that the  society  is built on seven guided principles  which  includes  Humanity, Impartiality, Neutrality Independence, Voluntary  service, Unity ,and Universality  across the  globe,stressing that the  society  is partnering  with National Emergency Management Agency  (NEMA) and Adamawa state Emergency Management Agency  (ADSEMA ) during  its response to  victims.
He then  requested  the Adamawa state Government to supply the  State  branch  office  with logistics  for the  smooth  operation  and  services.