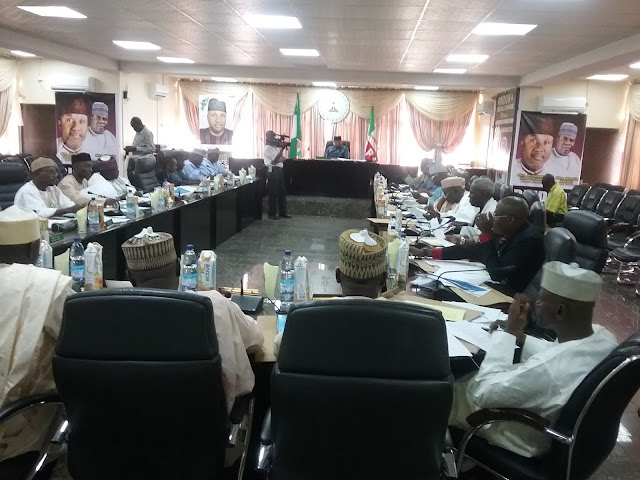 The Adamawa state Excutive Council  (EXCO ) has approved the sum N1.013,700,000,00.for the implementation of the  Adamawa state  Health  infrastructure, Renovation and Rehabilitation process.

The Honourable Commissioner ministry of Information Comrade Ahmad Ibrahim Sajoh ,alongside Commissioners of Health Dr.Fatima Atiku Abubakar ,Works ,Barr, Lilian Stephen,and that of Housing and Urban development Engr. Abubakar Idiris Magaji disclosed this  while briefing Journalists at the end of the EXCO Meeting presided over by Governor Muhammed Umar Jibrilla held at the council chambers of the Government House Yola.

The Information Commissioner said the  EXCO  discussed  a number of  issues  which  includes  approvals for awards  of contacts  for the rehabilitation of Galadima  Aminu  Way, Justice Buba Ardo Road  and dual carriage way linking P Z Round about, Jambutu  bye pass road  at the  cost of N693,653,154.30k.
The Council  also approved the  award of  contract  for the beautification  of the corridor leading from the entrance  of Yola International Airport  to Government House Yola  at the cost of N315,742,107.30.00.,stressing that the roads would have a clear ways and car parks were revenue would be generated for the  development of the state

According to the Commissioner, the EXCO  also approved  that the  tendering  process leading  to the  award of  contact  for the provision of  street lights  along Atiku Abubakar Road at the  cost of N171,684,049.28kobo.
The  council also ratified  the contract for the  procurement of Forty -Three Vehicles for  political office  holders  which  has already been undertaking and the Vehicles  has since been  distributed. Pointing out that the  EXCO  also approved for the  provision of Bullet -proof  BMW  Vehicle to the  office of His Execllency  the  Executive  Governor of Adamawa state.

The Commissioner however said the  council also  had a community component  when ever it met and at least one of the  beneficiary  community is Wauro-Jabbe  community at the outskates  of Kofare area which were going to be provided with a  street lights  at the  cost of N124,388,812,00k ,explaining that the approval  is subject to certain  doe processes  for the Ministry  responsible to  undertake.

He however called on the people of Adamawa state to give the present administration under Governor Muhammed Umar Jibrilla necessary support and cooperation in order to provide democracy dividends to the electorates.
11:27
Adamawa Daily Reports
News
Email ThisBlogThis!Share to TwitterShare to Facebook