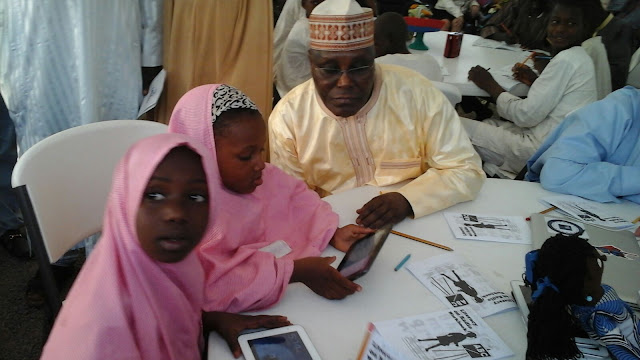 BY: Tom Garba and Abubakar Mohammed

United States Agency for international Development (USAID) has donated 801,000 US Dollars to ensure the Education of over 20,000 out school children in Adamawa state.

The gesture is predicated to have Almajiris, those displaced by insurgency and out of school children that are not able to attend school because of one social problem or the other.

The AUN President ,Dr Margee Ensign said that Non formal learning centers have been established across Yola and Jimeta community members have been engaged as facilitators to coordinate the activities of the centres.

Ensign added that the  TELA project will coordinate with Adamawa state Government to ensure access to and use of public facilities and schools  as non formal learning centers, and also effectively utilize the deep reach and  strong community connections of the AUN- Adamawa peace Initiative (API) and partners to engage facilitators , reach beneficiaries  and disseminate project information.

During the launching of the project in Yola where the founder of AUN and former vice President of Nigeria, Alhaji Atiku Abubakar, the Adamawa state Governor were heavenly presence.

Atiku Abubakar sympathised with the children for not being in school at the time they should, but blame the previous governments and equally accept the blame too for not doing what they would have done to encouraged the enrolment of school pupils, he emphasized his commitment to invest more on Education as the sure way of having peace in the North-East region of the country who are Educated backward.

He told them not to have any excuse of not going to school now,as all the things they needed to be educated is been provided.

The Executive Governor of the state equally sympathised with them reinstate his commitment  to support the project to succeed as he is having believe in the destiny of the young people of becoming the leaders of tomorrow.
00:30
Adamawa Daily Reports
News
Email ThisBlogThis!Share to TwitterShare to Facebook