NEWS: ADSIEC has Issued  a Ninety Days Notice to all Registered  Political Parties... 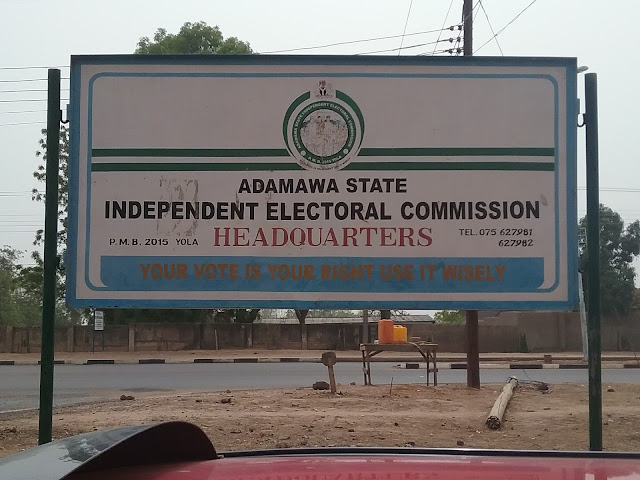 In preparation  to  2016 Local Government Councils  Election, the Adamawa State Independent  Electoral Commission  (ADSIEC ) has issued  a Ninety days notice to all registered  Political Parties  in the state.

The Chairman of  Adamawa State  Independent  Electoral  Commission  Alhaji Isa Shettima  who disclosed this  during  a meeting with  all the  registered  political parties  in his office. He assured  them that the  commission  will conduct  a free ,fair and  credible election  that will be  acceptable to  all people of the state.

During the  meeting, the members of the political parties  turn out  in their large number and  gave their  own contribution, Barrister  A. T .Shehu  state  secretary of people's  Democratic Party  (PDP) expressed  his  confident that the members of the Adamawa  Independent  Electoral  Commission  will conduct  a free and fair  election that  will be acceptable to  all, but warned the resident electoral officers (REOs) in the state  to fear God  and conduct  credible  election without bias;  contributing the chairman of Kowa Party  Sa'ad Adamu  call on the  state  Independent Electoral Commission  to use  card reader during  the forthcoming   local government election  in order to  avoid  election mal-practice. He added that the  commission  should borrow the card reader from the National  Independent  Electoral Commission  (INEC) for use in the state.