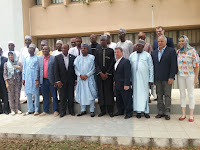 Prospective  Investors  are called upon to come and invest in Adamawa state. Governor Muhammed  Umar Jibrilla who made the called when he received  a team of Colombian  Delegation  led by Senator Edinson Delgado Ruiz  who paid him a courtesy visit at the State Government House Yola.


Governor Muhammed Umar Jibrilla has  assured the  visiting  Colombian Delegation that  Adamawa state Government  is ever ready  to partner with any investor in an effort to  move  the state  forward adding that  Adamawa state is  blessed with  vast Agricultural Land,  minerals and Tourism  potentials which if properly harnessed  will boost the  socio-economic  well-being of  not only the  state  but the  country at large. "Government  has put  adequate  measures  that  will create enabling environment for investors and  to harness from the  enormous  resources  in Adamawa state ."He however  guaranteed  that  the  state is  peaceful and  safe  for investment  at all  times.

Earlier on, the leader of the mixture of  Colombian Delegation  which comprises of Economists, Congressmen, and other Technocrats, Senator  Edinson  Delgado  Ruiz said the delegation was in Adamawa state to collaborate with the state government in the areas of Agriculture, Economy among others.

Senator  Delgado Ruiz explained that  Colombia is one of the  largest Latin American country  that grows  very faster  in terms of  economics growth and development, he also pointed out that  Colombia is also investing in Oil and gas  sector of the economy and  improves free trade zones to other investors  world wide.

A brief  presentation on the achievement of the present administration  under Governor Muhammed Umar Jibrilla for the  past Ten months  in office  was presented by the  Secretary to the State Government Dr Umar Buba Bindir to the  visiting Colombian  Delegation, while soveniers  were also presented by Governor Muhammed Umar Jibrilla  in appreciation of  their  visit to Adamawa state.
07:00
Adamawa Daily Reports
News
Email ThisBlogThis!Share to TwitterShare to Facebook