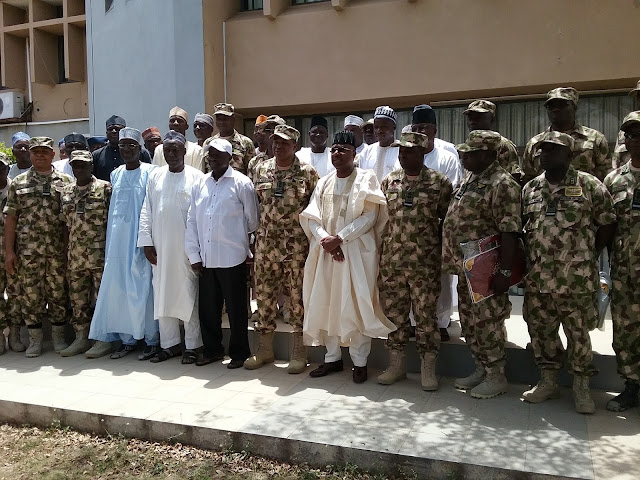 By Yunusa Abdullahi
The  Nigerian Air force Base station Yola  has been  assured of necessary support and assistance  by the  Adamawa state Government  for effective discharge of its responsibilities.

Governor Muhammed Umar Jibrilla had informed  the visiting Cheif  of  Air Staff  that  the state is expecting about Fifty-six Thousand Internally Displaced persons in the state  from the  Republic of Cameroon  in the  next few weeks  and called on the Federal Government to  and International Donor agencies to come to the aid of the  state  government. 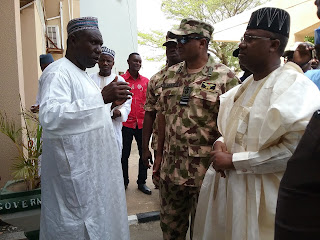 The Governor stated that  maintaining  peace and security  is everybody's business and appealed to the citizens  to be security conscious by reporting any suspicious person or object to the security agents in order to maintain  existing  peace  in the society.

While commending  President Muhammadu Buhari and other stakeholders on security matters for their efforts and professionalism shown in the  fight against insurgency in the North East, he revealed that at present Adamawa state  is calm and peaceful,

Earlier, the Chief of  Air Staff  Air  Vice  Marshall  Sadiq  Abubakar said he was in Adamawa state  in continuation of familiarization tour to Air  Force  Stations  in the  Northern part of the country  to evaluate  what his men were  doing in the last few months  and to have a  first hand information on the  activities of  the officers  in the  fight against insurgents  in  states affected  in the North East.

Air  Vice Marshall  Sadiq  Abubakar  commended Governor Muhammed Umar Jibrilla  for his giant strides in developing Adamawa state  within shortest period while in office  and solicited for the  support and cooperation  of Adamawa state government  and Traditional  institutions  to be extended to his  personnel in the state.

He  pointed out  that officials  of the Nigerian  Air Force  have assisted  Internally Displaced persons in Dalori ,Maiduguri and Abuja with medical services and personnel  at the  IDP camps.
He however  called for the  support and cooperation  of traditional  institutions and  general public  by reporting any suspicious persons or objects to the security agents for maintaining peace and security in the  society.

Also in a brief  presentation  on the  achievement of of the present administration under Governor Muhammed Umar Jibrilla, the Secretary to the State Government Dr Umar Buba Bindir highlighted  some of the laudable achievements of the present administration  in the areas of road  infrastructure, Education, Agriculture, Health Care delivery, among others.
09:39
Adamawa Daily Reports
News
Email ThisBlogThis!Share to TwitterShare to Facebook