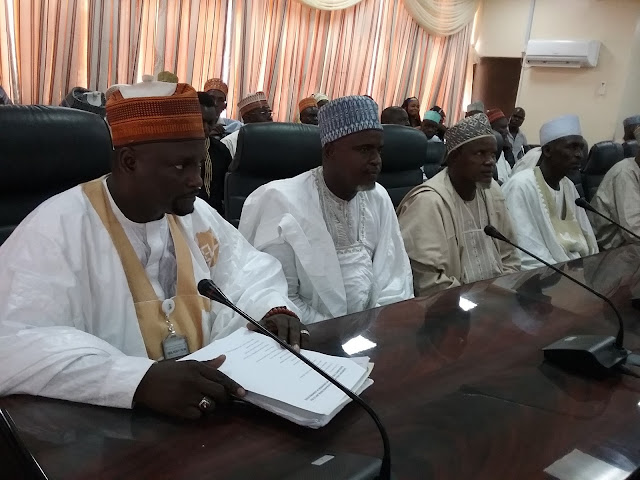 Nomadic Cattle  grazers  and farmers in Adamawa state have been called upon to tolerate one another for the overall development  and progress of the state.
Governor Muhammed Umar Jibrilla  made the called when  members of TABITAL PULAAKU JONDE JAM paid him a courtesy visit at Government House Yola.

The Governor stated that  both groups need to tolerate each other  in view of the important role  played  to the larger society, he said his government is determined to  see that the  welfare of the common man  being catered  by providing  basic  social  amenities  such as  Health,  Portable  drinking water, Agricultural lmputs, Good  roads and security  among others.

He also  appealed to the people of the state to live in peace  with   one another as peace  is above everything, adding that  without relative peace  no any meaningful  development  could be  achieved  and described  Adamawa state  as the most backward  state in the Federation  when compared to other neibouring  states like Taraba and Gombe.

Governor  Jibrilla  however said  his administration is  doing everything possible to  see  that the lives of  its citizens are fully protected  and honoured.

Earlier, the state Chairman of Tabital Pulaaku  jonde  jam Alhaji  Modibbo Ibrahim said  that  members of the  association were at Government House Yola  to congratulate the Governor  over his successful inauguration as Governor of Adamawa state and  to show their loyalty and support to the present administration under his leadership.

He also commended Governor Muhammed Umar Jibrilla for his giant strides taken  towards  developing Adamawa state  for the better.
He however appealed to the  Governor  to look  into the issue of  cattle routes  and Grazing  reserves  with a view of  avoiding  farm encroachment  which some times resulted into  disputes.

The  state Chairman of Tabital Pulaaku  Jonde Jam also suggested for the  government  to  set up a  committee  to liaised between the  Farmers and Grazers in order to have a  permanent  solution of crisis  among the  Two  groups.