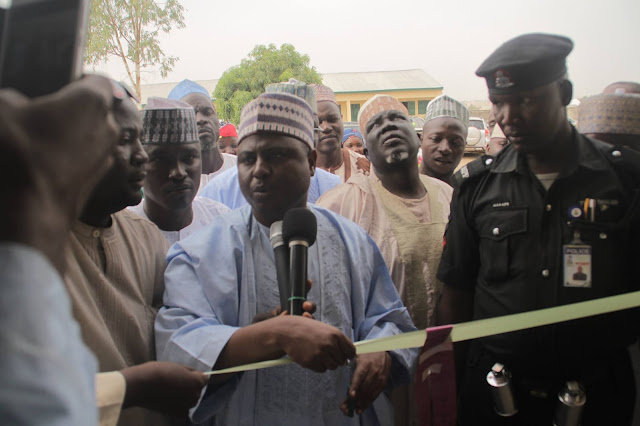 The Chairman Committee on Media and Publicity in the House of Representatives, Abdulrazak Namdas distributed 4 Senia Vehicles ,100 Grinding Machines, 15 Block Molding Machines and 6 Keke Nape  to his constituency.

The member who is representing Toungo, Ganye, Jada and Mayo- Belwa Federal Constituency of Adamawa State said that, this is part of his promises made during his campaign days to empower his electorates through programmes that will improve their living standards.

"My vision is to improve the living standard of my constituency" He said.

He noted that the items being giving out are a dream come true for him. He said “it has been my desire to serve and better the life of my people"

During the presentation, the Gangwari Ganye, Umar Adamu Sanda who graced the occasion charged Politicians to emulate the good leadership virtues of Namdas by fulfilling their promises to their people.

He expresses his joy while commending Mr Abdulrazak Namdas as a vibrant lawmaker doing well at the National Assembly coming from his own place.

A Special Guest at occasion, the Honourable Speaker, Adamawa House of Assembly, Hon. Kabiru Minjiyawa  commended the member for his giant stride within a short time stressing “we in the state will emulate you"

He urged the beneficiaries to make good use of the empowerment tools not only for them self but also to members of their community.
01:40
Adamawa Daily Reports
News
Email ThisBlogThis!Share to TwitterShare to Facebook