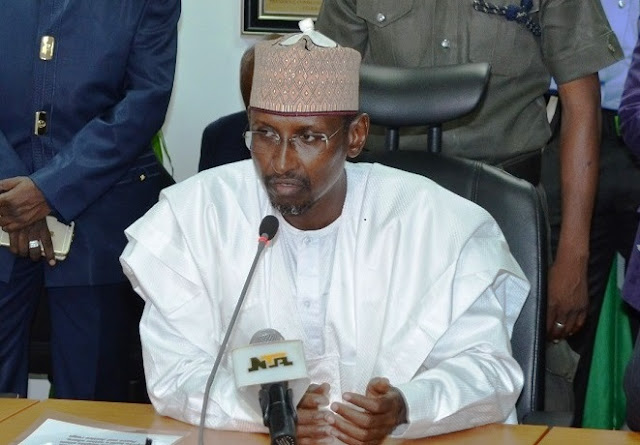 FCTA COMMENCES ROAD REHABILITATION IN ABUJA CITY
… SET TO PROSECUTE PERSONS DUMPING CONSTRUCTION WASTE INDISCRIMANATELY
To ensure smooth vehicular movement in and around the Federal Capital City, Abuja, the FCT Administration has commenced the immediate rehabilitation of some strategic roads within the City Centre.

Some of the roads under the first phase of the programme include the total rehabilitation of M20, the hitherto dilapidated road leading to the popular Utako Motor Park; rehabilitation of road shoulders along the Shehu Shagari Way in Maitatma District and Ring Road I (Nnamdi Azikiwe Expressway) respectively.

Others are, the trimming of overgrown trees and beautification of ornamental flowers along the road leading to Defence House and IBB Way both in Maitama District, Abuja, and the provision of kerbs at the famous Unity Park close to Transcorp Hilton Hotel, Maitama, Abuja.

Speaking on his plans to ensure a clean and filth free city, FCT Minister, Malam Muhammad Musa Bello insisted that Abuja under his watch must be restored to its original clean and green concept.

Malam Bello who assumed office about three months ago, as the 16th FCT Minister revealed that he has a mandate from President Muhammadu Buhari to restore Abuja to its original Master Plan in line with the vision of its founding fathers.

He, therefore, solicited for support and cooperation of residents, development partners and key stakeholders in the Abuja project to ensure that the city is kept clean at all times.

Conducting Newsmen round some of the on-going works in the city, Acting Coordinator of the Abuja Metropolitan Management Council (AMMC), Hajiya Safiya Umar said that the Minister upon assumption of duty had ordered the Agency to ensure prompt evacuation of all refuse whether liquid, solid or construction waste.

The Coordinator, who observed that the Federal Capital City has become dirty prior to the coming onboard of the present FCT Administration, however attributed the uncleanliness to the problem of transition period.

She thus warned that after this massive cleaning exercise embarked upon by the Administration, anyone found dumping construction waste indiscriminately would be prosecuted accordingly.

The Coordinator disclosed that even trucks used in the indiscriminate disposal of construction waste in unauthorized places would be confiscated if found.

Meanwhile, following the rehabilitation of the road leading to the Utako Motor Park, there was wild jubilation by motorists and commuters at the park who welcomed the development.

They commended the FCT Administration for fixing the dilapidated road, which has not been motorable for years.