Home » Special Report » Fuel Scarcity: Nigerians did not Elect us to Give Excuses- Lai Mohammed

Fuel Scarcity: Nigerians did not Elect us to Give Excuses- Lai Mohammed 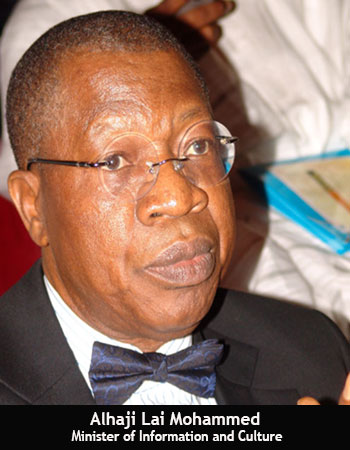 SPECIAL REPORT
The Minister of Information Chief Lai Mohammed while interacting with Journalists in Yola said, Nigerians did not vote the All Progressives Congress to give excuses over the lingering fuel scarcity.
" Yes, we appreciate the feelings of Nigerians. We also go through it, because we are not immune to it. As a responsible government, a government that was propelled to power by the votes of the people we cannot give excuses but empathize with them. And, this government is working 24 hours to ensure that this problem is resolved," Lai  said


Lai followed the Presidential entourage led by the Vice President Prof. Yemi Osibanjo who attended the wedding of  the Adamawa state Governor Sen. Mohammed Jibrilla Bindow's son.  He reiterated that the fuel crisis would soon be over.

He said the Federal Government is working to ensure that in 2 weeks time the commodity is made available in all parts of the country and alleviate  the sufferings of Nigerians.

According to him, some strategic steps had already been taken in that direction, he said, " some short term, some medium term and some longer term. Because the question will be what are we doing to alleviate this problem because that is what concern Nigerians."

Part of the measures he highlighted includes the Government's appeal to the oil majors to make fuel available to their companies operating in the downstream sector of the oil industry, adding that the difficulties encountered in getting foreign exchange was partly to blame for the fuel crisis.
02:06
Adamawa Daily Reports
Special Report
Email ThisBlogThis!Share to TwitterShare to Facebook