Home » News » NEWS: Governor Muhammed Umar Jibrilla has been Commended for his Giant Strides in Developing Adamawa State  through the  Provision of  Basic Infrastructure and  Other  Social Amenities.

NEWS: Governor Muhammed Umar Jibrilla has been Commended for his Giant Strides in Developing Adamawa State  through the  Provision of  Basic Infrastructure and  Other  Social Amenities. 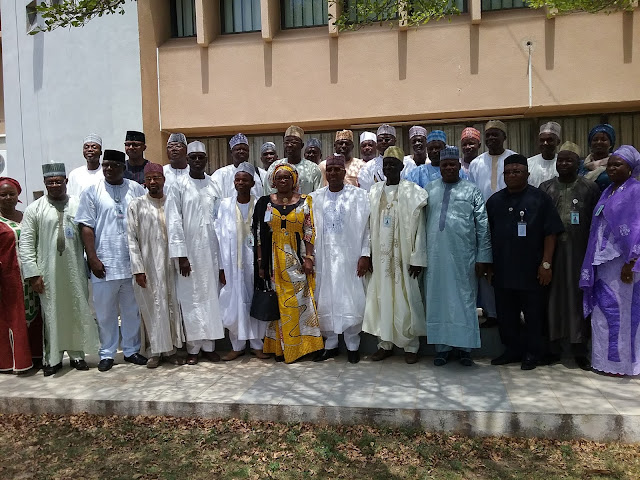 The  Acting  Director -General of the National Institute of Policy and Strategic  Studies, Kuru, Jos Mr Jonathan M. Jumamni, and Head of Delegation of  Group Five of Senior  Executive  Course 38 who made the commendation when he paid a courtesy visit  on Governor Muhammed Umar Jibrilla  at Government House Yola.

The Acting Director -General have  told  the Governor that the  delegation was in Adamawa state on a  one week study  tour to identify the challenges confronting the state  in their  efforts to  reduce poverty  and ensure inclusive development  through  wide consultations  with  stakeholders  with a view to proffering recommendations and implementation strategies by the Government.

He explained that  NIPSS conducts courses for Top Level Policy Makers and Executors drawn from different  sectors of the country, adding that  the centre  also researches into the social, cultural, economic, political, scientific, Technological, security  and  other challenges  that  faces Nigeria.

However, he said the Theme of this year's course as approved by  President Muhammadu Buhari  is "STRENGTHENING  INSTITUTIONAL  MECHANISM  FOR POVERTY  REDUCTION  AND INCLUSIVE  DEVELOPMENT  IN NIGERIA ."

The  leader of the delegation also explained that NIPSS also conduct seminars, workshops and other action-oriented programmes, stressing that the  institute was established in 1979 to serve as a high level centre  for reflection, Research  and Dialogue with the primary objectives of serving as the Nations Foremost Policy THINK TANK.

The delegation however invited  the Governor to participation and offer further clarification  and suggestions  where necessary  during the  presentation of the report  at the end of their course  at a parley  with  President Muhammadu Buhari in November, 2016.

While responding Governor Muhammed Umar Jibrilla said that his government  poised to  bring development to the people of Adamawa state  as well as to  bring change to the electorates.
The Governor explained that Adamawa state  has diverse ethnic  cultural groups which described as a  mini Nigeria. 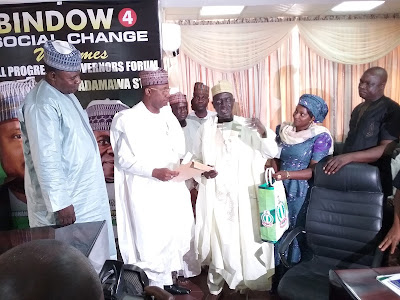 He also informed  the delegation that the state  is expecting about Fifty-six Thousand (56,000) Internally Displaced Persons  from  the Republic of Cameroon  and urged the  Federal Government and other International Donor Agencies to  assist  the IDPs.
He  assured members of the delegation that his government would give all the necessary support and cooperation to the  delegation  during  their study tour in the state.


Earlier on, the Secretary to the State Government Dr Umar Buba Bindir highlighted some of the laudable achievements of the present administration under Governor Muhammed Umar Jibrilla for the last Ten months while in office which includes the construction of roads  networks across the state, provision of Health  care, Education, provision of  portable drinking water  among others to the people of Adamawa state.