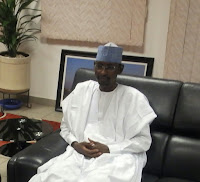 The FCT Minister, Malam Muahammad Musa Bello has commended the
residents of the Federal Capital Territory for the peaceful manner
they conducted themselves during the just concluded FCT Area Councils’
election.
The Minister who monitored the election exercise at the Gwarinpa I
District (Life-Camp), Kubwa satellite town and Jiwa Polling Stations
lauded the residents for the matured way they queued up to observe
their civic responsibility.
Malam Bello therefore urged them to keep the peace as they await the
outcome of the exercise; adding that the FCT residents have shown that
they are responsibly torchbearers in Nigeria polity.
He also paid tribute to the security agencies in the Territory for the
proactive and professional way they have handled the entire exercise
from the beginning to the end.