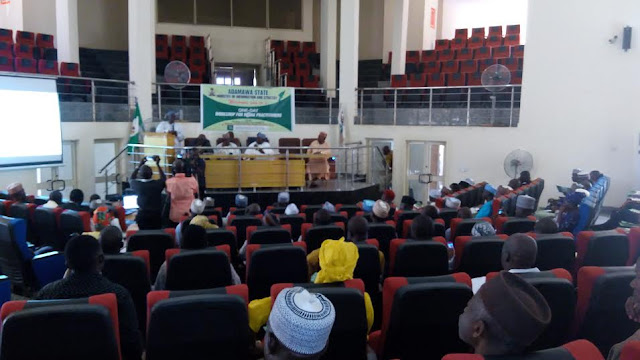 A One Day Workshop for Media Practitioners in Adamawa State was organised by Adamawa Ministry of Information and Strategy held at Admiral Murtala Nyako Training Center on the 17th of May 2016. The Adamawa State Governor, His Excellency Muhammad Jibrila Umaru who was represented by his Excellency Martin Babale on the occasion he said their mission is to put smiles on peoples faces in the State, and they stand to be corrected when ever they are wrong. Babale added by saying "this is a great joy seeing the Ministry organising a workshop that will train and enlighten Journalist on how effective their jobs are, I plead with all participants as the image maker of this State to please do what is expected of them " Martin said.

The Deputy Governor, concluded by urging all Journalist in the State to support the present administration and work together as a theme for the unity of our State. Let's unite to promote possible development,  he said.

The Secretary to the State Government Umaru Bindir who's presentation was done based on the achievement of his Excellency Governor Jibrila Bindow within the short period of his administration. He said there is a need for every individual in Adamawa State to be able to come out with new innovations. He said for a state to achieve its aims and objectives, we have to work in unity, peace for a greater development. Let's work together for the benefit of our State he concluded.

The Guest Speaker Dr John Ngamsa  who was a Practicing Journalist and now a Lecturer in the field presented a paper titled "Prospects and Challenges of the Bindow Administration: Media Perspective" He urged all Media Practitioners to abide by the rules of the profession.

Earliar on, the Commissioner, Ministry of Information and Strategy Ahmad Sajoh who in his speech said the workshop is aimed at coming together as journalist to discuss the prospects and challenges of Bindow Administration. He called on all journalist to work as a theme for the achievement of greater a Adamawa State.
00:47
Adamawa Daily Reports
Special Report
Email ThisBlogThis!Share to TwitterShare to Facebook