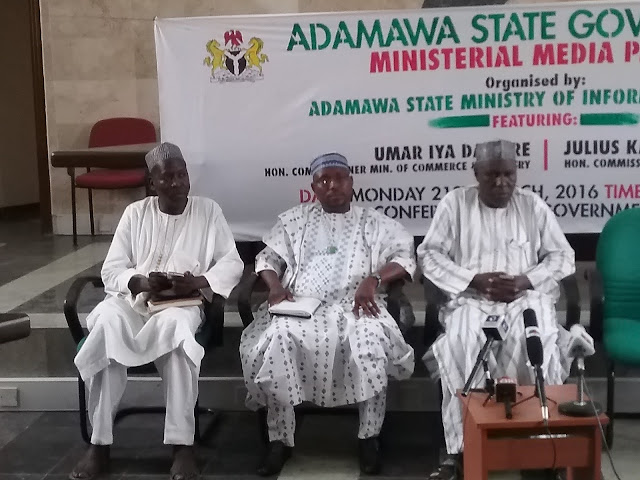 The  Multi million Naira  abandoned Mubi burnt bricks  has been  re-activated  by the present administration under Governor Muhammed Umar Jibrilla.
The  Honourable Commissioner ministry of Commerce  and Industries  Alhaji Umaru  Iya Daware  disclosed this to Journalists  at the  ministerial media parley organised by the state ministry of Information Yola.
The Commissioner revealed that   presently,  Mubi burnt bricks has been  re-socitated  to  run out  PPP Programmes, and  Board of  Directors  would be  inaugurated  to check out the  activities  of the company  for proper management.

The Commissioner  also explained that  feasibility studies  on all the  solid minerals has reached  an advanced stage and called on prospective  investors  to come to  and invest in the state ; according to the him, the collection method of Internally Generated Revenue  (IGR) would be enhance through  the introduction of e-Revenue collection  by the his ministry, adding that  a monitoring  unit has already  been established  in order to check the  activities of revenue  collectors  so as to increase government revenue.

"Collaborate with  Bank of  Industries   to support  small scale industries  and enhance commercial activities in the state have been established,  stressing that  a micro finance Banks  will be establish in all the  Twenty -One  Local government areas." He said He however  explained that his Ministry would open discussion with the  Bank of Infrastructure  to support Adamawa state Government  in rebuilding  the  burnt markets in the state.

On the  Guyuk Cement  factory, the Honourable Commissioner  explained that  an agreement  has been  reached  with  Dangote  Group of  companies  for the actualization of the  cement factory  for the overall benefit of the people of Adamawa state. He pointed out that some  investors  intent to establish  a Solar power plant in the state  to produce  electricity power supply  to the entire people of Adamawa state