Governor Muhammed Umar Jibrilla  had presided over the Swearing in Ceremony of  Seven newly Appointed Special  Advisers into his government  with a  call on the  appointees  to be  prudence and accountable in the discharge of their official responsibilities  while in office. Held at the  Banquet Hall of the Government House Yola, on Wednesday  25th May ,2016,Governor Muhammed Umar Jibrilla stated that  his Administration is poised to bring development to the  door steps of the electorates at grassroots. 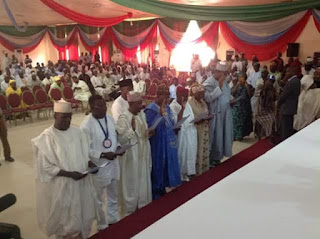 The Governor  challenged  the  newly sworn in  Special Advisers  to abide by the oath of office taken, he stressed that  their appointments  was done on merit as well as their records of service to the  humanity. He also  reiterated his government's  priority  to bring development to the people of Adamawa state and  assured them of support and cooperation  at all times .


In his remarks the  Chief of Staff Government House Alhaji AbdurRahman Abba Jimeta explained that the  swearing in Ceremony  is the first step in the government of Muhammed Umar Jibrilla, pointing out that more Special  Advisers  would be sworn in phases. He said  government  expects  nothing from them except  delivery of  service to the  electorates  as well as loyalty to the Governor  and Government of Adamawa state. He then announced  the List of the  Special  Advisers  and  their portfolios  which includes 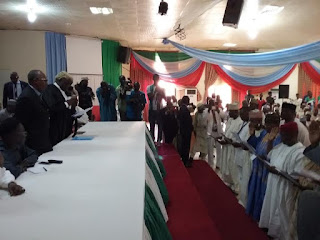 The  oath of office was administered by the State  Solicitor - General and Permanent Secretary Ministry for Justice Barrister Suleiman Muhammed.