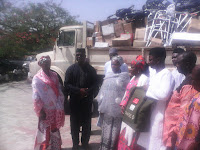 Gabasawa Women and Children Initiatives (GWCI) donates medical equipment and hospital consumables worth millions of naira to Adamawa  State Government for treatment of Boko Haram victims in three most affected LGAs in the state.

Presenting the items to the Hon. State Commissioner of Health Dr. Fatima Atiku  Abubakar at the premises of Adamawa state Primary Health Care Development Agency Yola,  the  Executive Director GWCI  Mrs. Doris Yaro, said  the donation was part of its efforts aimed at enhancing medical treatment and rehabilitation of victims of terrorism and insurgency in the state.

Mrs. Yoro disclosed that the items were presented in partnership with Victims Support Fund VSF “It is a privilege for GWCI  to be part of this very useful intervention in support of victims of terrorism in the North-East sub-region of the country; and enhance their medical care and treatments.” She said

According to Mrs Yaro  It is quite unique  we are in partnership in this case with many partners in United States of America to source this materials and that so far The Foundation, had donated medical facilities worth $4 Million US Dollars to Borno,Yobe and Adamawa state.

Receiving the items on behalf of his Excellency Governor Muhammadu Umaru Jibrilla, the Honourable Commissioner Ministry of Health Dr. Fatima Atiku Abubakar thanked the NGO and promised to use the items judiciously. 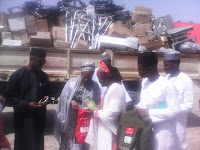 Also in her remark, Professor, Nana Dogo, Operation Director, Victims Support Funds, said that the VSF is responsible for logistics that  facilitated the transportation of the equipment from Lagos Port to Borno, Yobe and Adamawa states.

In his vote of thanks, the Executive Chairman Adamawa State Primary Health Care Development Agency Dr. Abdullahi Dauda Belel said the gesture is timely and encourage other NGOs to emulate the gesture.