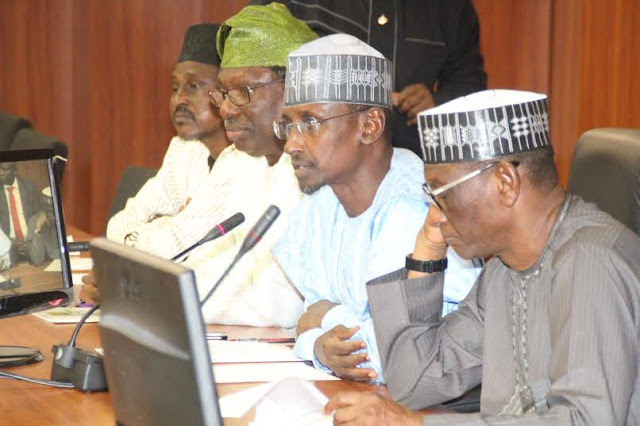 The new Chairmen of the six Area Councils in the Federal Capital
Territory have been charged to evolve a new and dynamic roadmap for
grassroots development in line with the change mantra of the President
Muhammadu Buhari’s Administration.

Malam Bello reiterated that such roadmap should be holistically aimed
at transforming FCT grassroots into communities where people can live,
work and invest.

The Minister insisted that if the people at the grassroots must enjoy
a new lease of life, then the Area Councils must effectively serve as
transmitter stations for government’s change agenda.
His words: “To achieve this therefore, it is very necessary to
strengthen institutional framework for effective service delivery in
the Area Councils.”

According to him, “the onus to demonstrate good leadership does not
fall on the FCT Administration alone but also on you the drivers of
the FCT grassroots governance, that is our Council Chairmen and
Council members”.

He however advised the new Council officials to go back to the basics
in the areas of environmental hygiene and general cleanliness at the
community level.
“Whatever you do, as long as you don’t imbibe in the people under your
Area Councils the need to be hygienic, to be clean right from the
basic family unit, then whatever that is being done is going to be
built on shaky foundations,” the Minister stressed.
In his opening address, the FCT Permanent Secretary, Dr. Babatope
Ajakaiye remarked that the retreat is the second of the set of the
three capacity building programmes arranged to equip the newly elected
Area Council officials in the FCT for the rigorous job ahead.
Dr. Ajakaiye noted that the significance of the retreat cannot be
overemphasized because of its focus and theme, which is, “On roadmap
for grassroots development of the FCT Area Councils in line with the
Federal Government’s Change Mantra”.
He described the retreat as unique because it has in attendance civil
servants who are also principal officers in the Area Councils being
the first line of officers the elected officials and principal
officers sit together with to receive the same information on the ways
affairs should be conducted and go back to work together amicably.
Muhammad Hazat Sule, FCAI
Deputy Director / Chief Press Secretary,
Tuesday, May 24, 2016.
06:39
Adamawa Daily Reports
press release
Email ThisBlogThis!Share to TwitterShare to Facebook