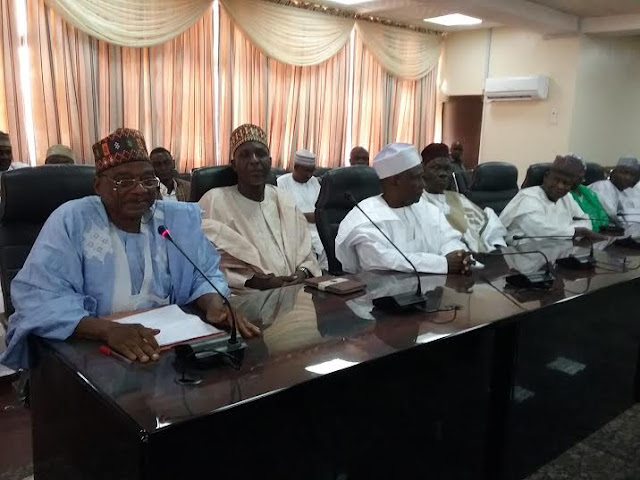 By Yunusa Abdullahi
Governor Muhammed Umar Jibrilla says his administration is poised to provide qualitative and sound education  to the children of Adamawa state. He stated this when he granted in audience members of the Governing  Council of  the Adamawa state University Mubi  led by Professor  Sa'ad Tukur  who paid him a courtesy visit at Government House Yola on May 7th, 2016.

While  expressing confidence on the members of the  Governing Council and management  staff of the  institution, the Governor also lamented that  government will  continue to accord priority  on University  in view of its importance  in producing the much needed manpower  to the society  and the country  in general. 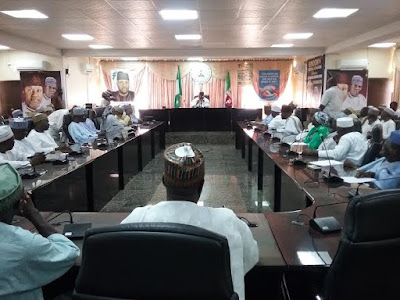 Earlier, the Chairman Governing Council of the University  Professor Sa'ad Tukur said  members of the
council  were at Government House Yola  to thanked the Governor for the  support and cooperation being given to the  university by the  present  government.

Professor Sa'ad Tukur also said "State University is  supposed to be  the engine room for development of the state  and the solution  of the  problems of  that state, " adding that "There should be partners with the state government and Industries and Agriculture  in the state  so that the state should be able to move  forward. "
He also appealed to the government to continue to support the  University  with all the necessary requirements  in order to provide highly skills graduates  stressing that  Education is the  pillar for nation building.

Also in a remark by  the  Honourable Commissioner Ministry of Information Comrade Ahmad Ibrahim Sajoh assured  members of the  Governing Council that the state government will  do everything possible to see that the  University  excell  academically and otherwise. Comrade also said that the present administration under Governor Muhammed Umar Jibrilla has  shown it's commitment towards  uplifting the standard of  Education in Adamawa state, pointing out that the  University  is a Citidal  of Learning, he added.

The Commissioner said the  University  has Three  functions ,Teaching, Research and Community Service  explaining that  Adamawa State  University Mubi is among the best universities in the  World  and the  present administration under Governor Muhammed Umar Jibrilla  is obsolutely  committed to the  development of the Adamawa state  University Mubi, he added.
06:03
Adamawa Daily Reports
Special Report
Email ThisBlogThis!Share to TwitterShare to Facebook