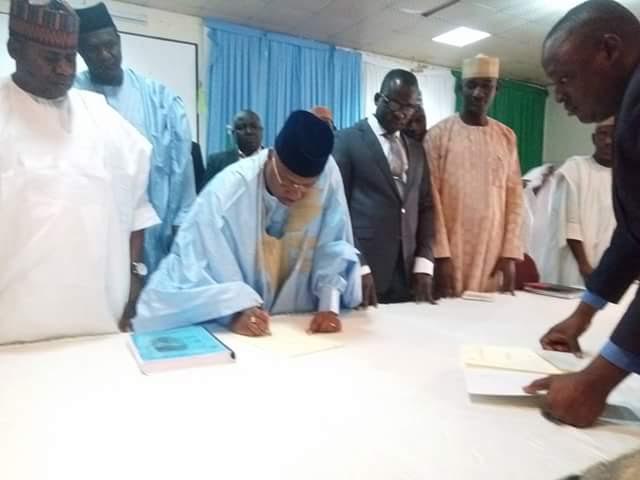 31st  May, 2016.
Following the  Approval of 2016 Appropriation  Budget  by the  members of the State House of  Assembly, Governor Muhammed Umar Jibrilla have finally assented the  appropriation Bill  into  Law. In an historic and brief ceremony  held at the Banquet Hall of the Government, Governor Muhammed Umar Jibrilla has  commended members of the House of Assembly  and  the leadership of the house  in particular  for making a  very good  observation  in most of the  Budget  being presented by the  Executive. The Governor revealed that the Executive  and the Legislature  have created a  very strong  synergy  between the two  arms of government  by bringing  a Social Change  into Adamawa State.

He stated that " This is the  first Budget  I am  experiencing  in my life to sign the  Budget  as an Executive  Governor, we have been doing it from the Legislative part, but this is my  first experience. I want to assure  Adamawa  people  that we will implement  this Budget  religiously  as long as our IGR  is increasing, so I  want to  cease  this opportunity to urge the people of Adamawa state  to  cooperate with the  consultant on Revenue Collection  for the overall development of the state." 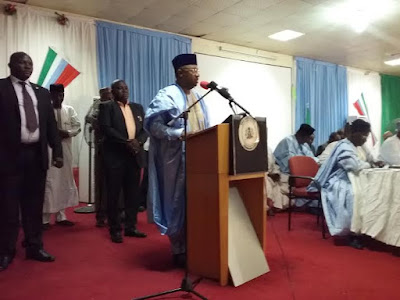 The Governor also assured that  all government  spendings  will be in line with  due process  and with budgetary provisions in the 2016  Budget, stressing that the Executive  have carefully  planned  the Budget  to ensure  that  all areas that might give hiccups were addressed. He however  thanked the entire  members of the State House of Assembly for graciously  approving the 2016 Budget for the development of Adamawa state. He then called on  investors to come and invest in the state. On the other hand, he called on the  citizenry  to be patience with the  government  and assured that the Local Government Salaries would  be a thing of the past.

In his remarks the  Deputy  Speaker  Honourable  Sunday Peter who represented the Speaker Honourable Kabiru Mijinyawa said the 2016 Budget  reflects  the  Change Policy  of Governor Muhammed Umar Jibrilla's administration which the House has took time to do a thorough job  in scrutinizing the Budget  to make it a reality. He used the opportunity  to  appreciate  all the  Ministries, Agencies  and Departments  for aveiling  themselves  during the Budget  Defense. 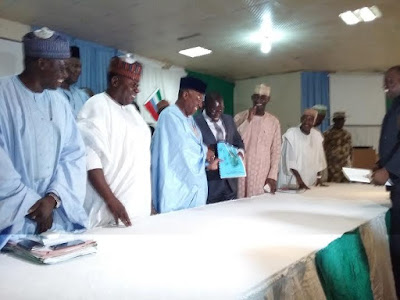 The Deputy  speaker  also called on the  attention of the  Executive arm to make sure that all that have been  done in the  Budget  are being  adhered to the  latter. He thanked Governor Muhammed Umar Jibrilla for  taking his time  and members of  his Dream Team  to sign the 2016 Budget  in public and solicited for the support and cooperation  of the  people of Adamawa state to the present administration  in order to develop the state  for the  better.

Earlier the  Honourable Commissioner Ministry of Information and Strategy Comrade Ahmad Ibrahim Sajoh gave a brief  highlight  on the Budget  and referred to it as a Budget of Social Change, Progress, Development and  Consolidation. He also  assured that  all spendings  will  be  in line with due process  and with the  budgetary provisions of 2016. 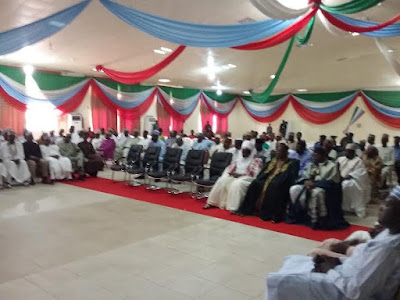 Also in his vote of thanks ,The Chief of Staff Government House Alhaji AbdurRahman Abba Jimeta  thanked  all those that attended the ceremony and also  commended the members of the State House of Assembly for exhibiting an excellent and mutual relationship between the Executive arm  and the  Legislature  to enable the  Two arms have a very excellent  conducive  atmosphere  for  moving Adamawa state forward.
It could  recalled  that in December 2016 ,Governor Muhammed Umar Jibrilla  had presented the appropriation Bill  of 120,126,857,430,00k  only to Assembly for consideration and  approval.
03:20
Adamawa Daily Reports
News
Email ThisBlogThis!Share to TwitterShare to Facebook