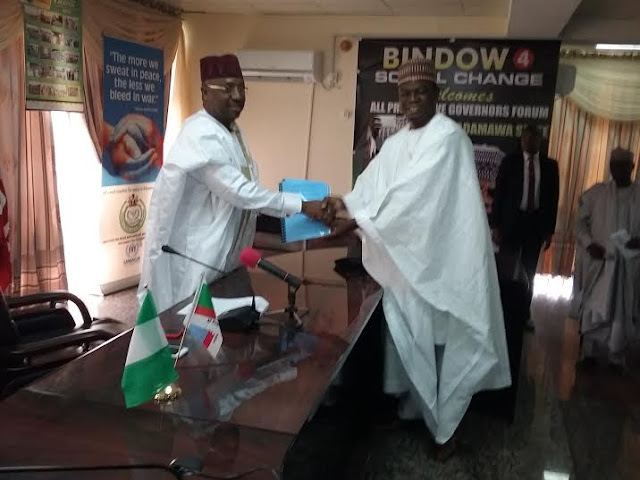 Governor Muhammed Umar Jibrilla have reiterated  the resolved of his administration to  have a zero tolerance for corruption, Mismanagement  and waste of public  funds .The Governor gave the assurance when he  received  an interim report  of the committee  on Verification of Local Government Staff  headed by Cheif  Maurice  Vunobolki at the Council Chambers of the Government House, Yola.

While submitting the report, the Chairman of the  committee  Chief  Maurice Vunobolki  said the Thirteen Man committee  was set up  in July  2015  to verify the  actual Local Government  Workforce with a view to  creating a  Data  Base for effective  implementation of the e-payment  salary system in Adamawa state.
The committee  chairman  explained that the  committee  had identified fraudulent  alteration  of names on payment  vouchers, pay record cards, Employment  in 2015 that violated Executive  limit approvals, irregular and under - age employment. 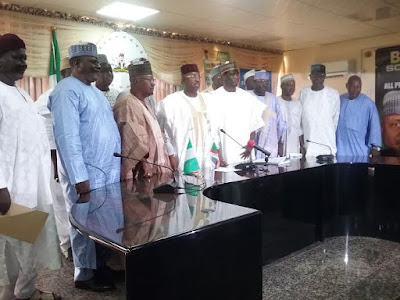 According to the chairman,  a total number of 12,609, failed the migration  process 5,119 did not turn up for the verification  exercise  and 1,780 were under -aged employee. He said the committee established  the correct Grade Levels /Steps of the screened  staff using the 18,000 Naira Minimum wage  salary  system, Consolidated medical salary structure  (CONMESS ) and consolidated  Health salary structure  (CONMESS ).

Chief Maurice Vunobolki pointed out that the report contains Findings, Observations, agenda Recommendations and Consideration  for further  action by the government  and hoped that the  government would fine the report useful  for the implementation of  e-payment  salary scheme  for local government  in the state.

He thanked the Governor  on behalf of the members of the committee  for giving them the opportunity to contribute their own quota towards the development and  progress of the state.

While receiving the  report, Governor Muhammed Umar Jibrilla thanked  members of the  committee for a job well done and  assured that  a committee  would be set up to  in order to  produce a white paper  based on the  committee 's  report  for proper implementation  by the  government. 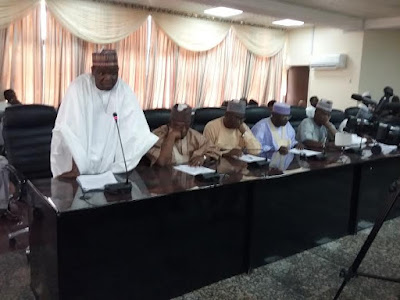 Governor Muhammed Umar Jibrilla said  his administration is poised to to ensure that  prudence  management of resources  are enhance in order to uplift the  living  standards of the  people of Adamawa state  and called on the  relevant  agencies  to consider the  report for the  development of the state as a whole.

It could be  recalled  that the Maurice  Vunobolki 's  committee  was inaugurated  in July 2015 by Governor Muhammed Umar Jibrilla  to verify the  actual  workforce  of  Local Government Councils in Adamawa state.
03:43
Adamawa Daily Reports
News
Email ThisBlogThis!Share to TwitterShare to Facebook