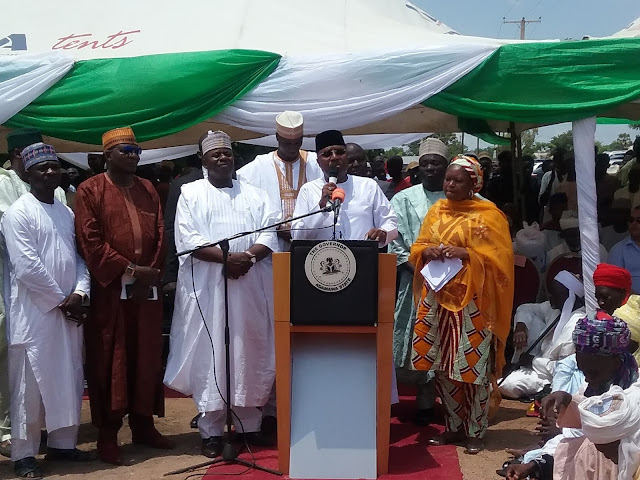 Governor Muhammed Umar Jibrilla have reiterated his administration commitment to  provide road infrastructure and other social amenities in the state.

His Excellency,  stated this on Thursday  28th  July  2016 while  flagging off the construction of 6.075 Kilometers of Yolde Pate / Sabon Pegi roads  in Yola South and 2 kilometres  road  at Vunoklang  in Girei Local government areas. “ My Government would  not relent  it's efforts in fulfilling major campaign promises  to the teeming electorates of this state, particularly  roads infrastructure due to  its economic importance and community development.” He said 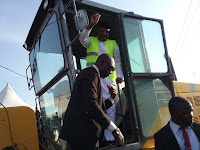 The Governor also  explained that  very soon  the government  would  also flag off similar roads construction  in Numan, Ganye ,Guyuk and other towns  across the state.  He however announced that the  present administration  have constructed and completed  about 60  roads in the state capital as well as  in Mubi Town  in just 13 Months while in office  and solicited for the support and cooperation  of all the people of Adamawa state.

In her remarks, the  Honourable Commissioner Ministry of  Works Barr.Lilian Nabe Kayode  explained that  the  present  government under the leadership of governor Muhammed Umar Jibrilla have constructed  and completed  over 47  Township roads  in Jimeta  and Yola metropolist  as well as 15  roads  in Mubi Town and  urged the  people  to desist  dumping  of refuse and garbage into the  drainage system to avoid  flood. 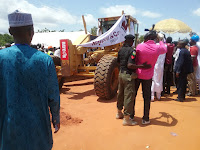 The Commissioner also  explained that the  6,075 kilometres  Yolde Pate / Sabon Pegi roads in Yola South  was awarded to ROYCON Construction company  and the 2 Kilometers Vunoklang  road in Girei Local government area  was awarded to a Chinese Company  TEC Engineering Nigeria  Limited  at the cost N 1,300,545,000.00 respectively and urged the contractors to maintain  standard and  specifications.

In his  goodwill message  ,the Chief of staff government house Alhaji AbdurRahman Abba Jimeta had enumerated some of the laudable achievements of the present administration under Governor Muhammed Umar Jibrilla  in just one  year  and solicited for the support and cooperation of the people of Adamawa state to  the APC led government  in order to  move state forward.