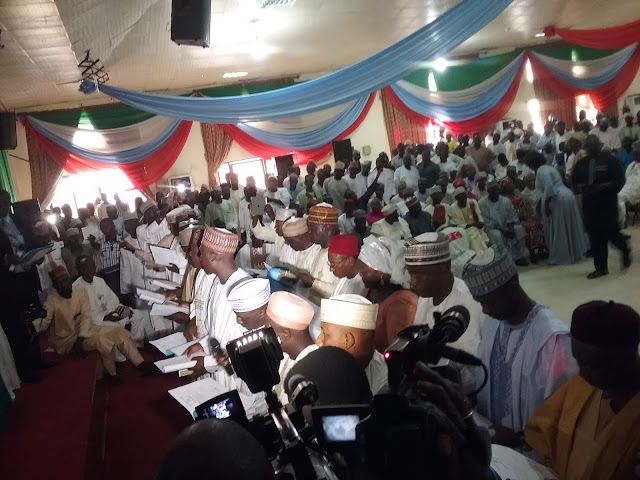 Governor Muhammed Umar Jibrilla  says  prudence, Accountability, Due process and Transparency  is the  guiding  principles of his administration.

Deputy Governor Engr.Martins Babale  stated this  while  presiding over the swearing in Ceremony of  Eighteen out of Twenty -One Newly Elected Local government councils  Chairmen  at the  Banquet Hall of the Government House Yola on Monday 1st August  2016.

While congratulating the newly  elected council  chairmen, the  Deputy Governor remained them to abide by the oath of office taken in the discharge of their official responsibilities.

He assured them of the state government  support and cooperation  in order to provide democracy dividends to the  door steps of the electorates at the grassroots.
Engineer  Martins  Babale  also revealed that the  tenure  of the  council  chairmen is now Two  Years as provided by the  law.

Responding on behalf of the  council  chairmen, the Chairman of Fufore Local government Barrister Aliyu Wakili Boya  thanked the electorates of Adamawa state for giving  them the opportunity to serve  and promised to give  their total loyalty and support to the present administration in order  to move Adamawa state forward.
He also  pledged  that they  would abide by the oath of office taken  and also  assured that  they would  continue to contribute their quota towards the development of the  state.
The  oath of office was administered by the state Cheif  Judge  Justice Ishaya Kida Banu.