2016 Hajj: Governor Bindow Call for Pilgrims to be law abiding...

Adamawa state  intending Muslim  Pilgrims  have  been  called upon to  abide by the laws of Saudi Arabian authorities  while performing this year's Hajj at the  Holy Land.

The Governor reminded the  pilgrims  that the  Saudi  authorities  had a serious  penalty  laws  on any  pilgrims  who violates  such  laws and  would be punished for any  crime  he committed.
He also called on pilgrims  to pray for the  peace and  stability  of Adamawa state and the country at large. 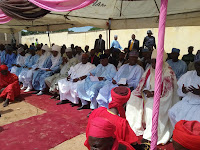 In his remarks the 2016 Amirul Hajj  and leader of the state government  delegation, His Royal Highness  Gangwari Ganye Alhaji Umaru Adamu Sanda  had  thanked Governor Jibrilla for the support and cooperation being extended to the state  Pilgrims  and assured that the  state  contingents  would be  of good ambassadors  while  in the  Holy Land.

The  Amirul-Hajj  had assured the  Governor that they  would continue to  work  as a team  with the  officials of pilgrims  welfare board  for the overall  progress and development of Adamawa state.

Also in his  goodwill message, the  Lamido Adamawa His Royal Highness Dr Muhammadu Barkindo Aliyu Mustafa who  was represented by the  Dan Galadima  Adamawa  Alhaji Mustapha  Aliyu  called on the pilgrims  to exhibit  sense of  honour  and maturity  as well as to  abide by rules and regulations governing their stay in the Holy Land.
Earlier, the state Chairman of the Muslim Pilgrims welfare board  Alhaji  Ibrahim  Bilal pointed out that  Governor Muhammed Umar Jibrilla has assisted  the board  by providing a  befitting accommodation  for the  state  Pilgrims at Mecca and Medina as well as  making provisions of good  and healthy  meals  to the  pilgrims  throughout  the Hajj exercise.
About Two  Thousand  Muslim  Pilgrims  were expected to  perform the  spiritual  exercise  for the  year  2016 from  Adamawa state.