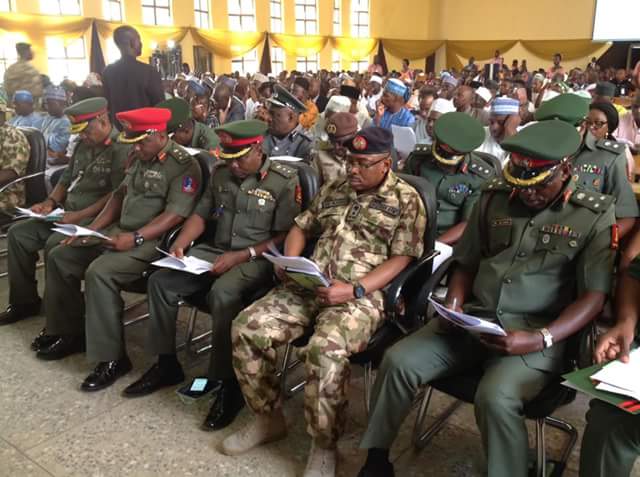 About Two  Point Five Million people were displaced  as a result of insurgency in the Chad Basin.
The  former Military Head of State Retired General Abdul salami Abubakar   disclosed this  on his  key note address he presented  at the  Regional Conference  on Peace Building and Reconstruction  in the  Chad Basin  organised by the Modibbo Adama University of  Technology Yola  in collaboration with the  Nigerian Army.

The Retired  General   said the  region will require  massive international  financial  support to  deal with the  on-going  humanitarian desaster and long term economic recovery, explaining that  a successful  fight against insurgency  requires  strong and sustainable  political, productive  collaboration among  armed forces other intelligence agencies  and communities.

The  former military Head of State  revealed that  good  governance  is the  critical element  in a sustainable  peace-building process, stressing that  violent extremist groups  emerge and flourish  in countries  or environment  characterised by  poor governance, Lack of accountability  and high level of corruption  among others in the society.

In his remarks, Governor Muhammed Umar Jibrilla who  is the  Chief  Host at the occasion  had commended President Muhammadu Buhari for his efforts in the fight against insurgency in the Chad Basin region.

Governor Bindow poited out that  his government will continue to support the Military and other security agencies in the  maintenance of peace and  security, explaining that  Adamawa state is peaceful,  stable and calm.

He also commended the Military  and other security agencies in Adamawa state for their efforts in maintaining peace and security despite  enormous  challenges  faced in fighting insurgents in the North East sub-region.

Also in his  key note address, the Chief of  Army  staff LT.General Tukur Yusuf Buratai commended the  governments of Adamawa, Borno and Yobe states  for their support and cooperation  in  the  fight against insurgency in the  region.
General  Buratai  assured that  the  military  will  continue to  to play it's Statutory responsibilities  of  defending the territorial integrity of the country  as well as protecting the  lives  and properties of citizens.

Earlier in his welcome address, the Vice Chancellor  Modibbo Adama University of Technology Yola Professor  Kyari Mohammed  said the  historic  conference  was convened to seek pathways to  permanent resolution of the  crisis  bedevilling the Chad Basin region  and also to address post conflict  issues in the  region.
Professor  Kyari  also explained that the  conference  will address the voluntary and dignified returns of  Internally Displaced persons  to their communities, rebuilding and provision of social  services such as schools  and Hospitals in the  affected areas.