NEWS;' Protection of Lives and Properties of Adamawa Citizens Remains Number One Priority of my Administration" Says Governor Umaru Jibirilla 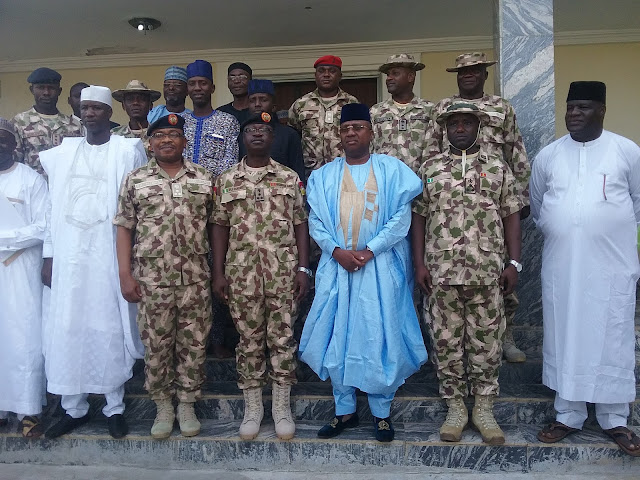 The Governor stated this when he granted in audience the newly appointed  General Officer Commanding  (GOC) 3 Division of the Nigerian Army  Brigadier General  Peter J.Dauke who led other military officers on a courtesy visit to the Governor  at his residence.
Governor Muhammed Umar Jibrilla said the relationship between the military and his government is very cordial and commended President Muhammadu Buhari for his giant  efforts in maintaining peace and security in the North Eastern part of the country.

While congratulating the new GOC over his recent appointment, the Governor also assured that his government will continue to support the Military in order to  exercise  their  primary responsibilities  of protecting the territorial integrity of the country as well as maintaining peace and order.
He also pointed out  that Adamawa state is very  calm and  stable at present  and assured that the  state  ever ready to  host the 2016/2017 NYSC  orientation  for the first time  since the beginning of  insurgency  about  Five years ago. He however  stressing that  government is  suggesting  to close all the  IDP camps  across the state. 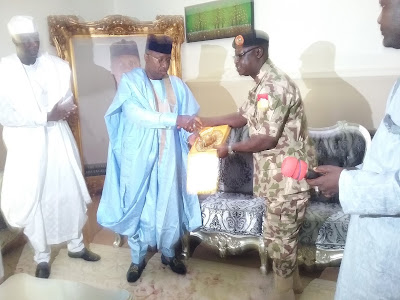 Earlier in his remarks, the new General Officer  Commanding  3 Division  Brigadier General  Peter  J,Dauke had told Governor Jibrilla that he was in Adamawa state on familirization tour to military formations  under  his  command.

Brigadier General  Peter Dauke  thanked Governor Muhammed Umar Jibrilla for his  support and cooperation being extended to the Military and other security agencies in Adamawa state  and called  continous  cordiality between the military and the state  government. He also  applauded the Governor for his  policy trust on security in the state  and commended the Governor for the  infrastructural development being carried out by the present administration under Governor Muhammed Umar Jibrilla  in the state.

The new GOC  later presented  a sovenier to Governor Muhammed Umar Jibrilla in appreciation of his kind gesture to military and  other  security agencies.
15:01
Adamawa Daily Reports
News
Email ThisBlogThis!Share to TwitterShare to Facebook