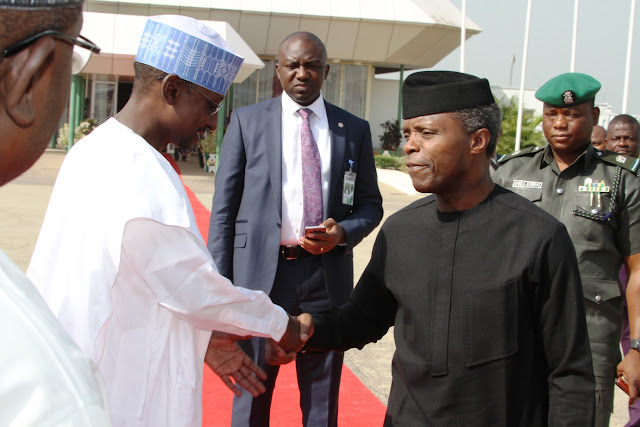 Since he was plucked, in a manner of speaking, from his previous assignment as the boss of National Hajj Commission of Nigeria and invested with the back-breaking task of administering the affairs of the Federal Capital Territory (FCT), Malam Muhammad Musa Bello, has exhibited discernible phases of positive disposition to his assignment and - wait for it - with appreciable results.

The minister, who took over the mantle of leadership on Wednesday 11th November 2015, immediately unchained the FCTA and placed it on the path to sustainable development with a firm promise not only to sustain the legacies of his predecessors, but to also increase the tempo of executing developmental projects in the territory.

It has often been said that anniversaries, either in the life of an individual or in the history of a nation, is a milestone worthy of celebration. On this occasion of Muhammad Bello’s three hundred and sixty five (365) days in office as Minister of the Federal Capital Territory, I intend to interrogate the man’s activities in office so far with a view to highlighting some of his achievements.

Apart from soliciting for the cooperation of members of staff of the Administration to ensure the unhindered execution of his agenda for the nation’s capital city, Bello equally gave the assurance that his administration would block all leakages in order to free badly needed funds for the development of the Territory.

With his eyes firmly set on leaving a positive imprint on the canvass of history of the FCT, especially in the area of infrastructural development, the first fundamental thing the minister did was to embark on visits to several project sites with a view to taking stock of inherited projects that have immediate and direct bearing on the lives of FCT residents. Some of the projects visited include the Abuja Light Rail and the knotty Karshi – Apo – Arah road.

In order to prove to all and sundry that he is not an armchair minister, Bello embarked on a frenzied nocturnal tour of the city to ascertain the functionality of streetlights in the capital city, after which he charged the Abuja Metropolitan Management Council (AMMC) to fix all broken lights as quickly as possible.

Keenly aware of the pivotal importance of the on-going Abuja Rail Mass Transit, the minister assured residents of FCT that his Administration would work assiduously to make the Abuja rail system operational in the last quarter of 2017.

Another area that attracted Bello’s ministerial attention is environmental sanitation, which necessitated his unscheduled visit to the Abuja Environmental Protection Board (AEPB) to signal the commencement of a frontal war on environmental filthiness (WOF). To underscore the degree of his seriousness, the minister after reading the riot act to the staff of AEPB, vowed to recover the N10.5 billion owed the Abuja Environmental Protection Board (AEPB) over the years. To bring the issue of personal hygiene and environmental nuisances to the fore, he introduced the FCT Household and Community Sanitation Exercise in the Area Councils and Satellite Towns of the Federal Capital Territory. This was after giving the sum of N1.6 billion, as bailout to the six Area Councils to settle the salaries owed their staff. This is unprecedented, because at that time, majority of states across the federation were going cup in hand to the Federal Government for bailout. Moreover, it was not his duty as Area Councils’ staff salaries lies squarely on the shoulders of the Councils.

In the area of provision of potable water, Bello after series of meetings and visits to the FCT Water Board facilities, including the Lower Usuma Dam, gave a firm assurance that his Administration would work diligently to improve supply of clean water to the entire residents of the FCT and true to his promise, he has been inching closer to realizing this noble objective.

In his determination to decongest Abuja city centre, the minister has invested so much attention on the development of the six Area Councils, and the Satellite Towns, just as he has moved the Satellite Towns Development Department (STDD) to Karshi to bring it closer to the rural people that the department is meant to serve.

Malam Bello also took a bold step by visiting the Apo-Karshi-Arah Road, where he made a commitment to complete the road through expeditious payment to the contractor a pending job certificate of N324 million.

In his determination to build on the legacy left behind by his predecessors in the sanitization of the Abuja Land Administration system, the unassuming Bello equally set a machinery in motion that will help sanitize the processes of allocating land in strict compliance with the rule of law, declaring that henceforth, the FCT Administration would only allocate plots of land in the Abuja industrial zones to genuine manufacturers that have capacity to develop them for purposes they are earmarked for and must be within a time frame.

It would also be recalled that few weeks after assuming office, Bello did what several Nigerians thought was far-fetched and practically impossible when he offset the over N2 billion owed cleaning and maintenance contractors by the previous Administrations to enable them resume work on the evacuation of solid waste in the city center and satellite towns. Equally, contractors owed various sums below N20 million have been settled amounting to over N6 billion; while over N19 billion has been paid to multinational contractors to enable them return to sites. In the first quarter of 2016, the FCTA also released the sum of N5,744,835,928.38 to various development partners being counterpart funds for the projects that they are executing in the Federal Capital Territory.

The Minister equally paid over N1.787 billion to the Universal Basic Education Board, which included arrears that have not been paid since 2013. He has further released the sum of N2,939,681,413.96 and N808,075,585.62 as counterpart funds for the Abuja Rail project as well as its Consultancy Services respectively. All these obligations ought to have been carried out by the previous FCT Administrations but were ignored in the name of lack of funds.

Bello, who has been able to achieve all these feats through frugality and admirable husbandry of fiscal and material resources, has also resuscitated the hitherto moribund Abuja Environmental Protection Board (AEPB) and replaced its leadership with capable hands that are already delivering on its mandate. It is worthy of note that Malam Bello also followed this up by establishing the FCT Task Team on Environmental Protection to work alongside 200 officers/men of the Nigeria Police Force and Nigeria Security and Civil Defence Corps for enforcement purposes.
Contrary to insinuations from several quarters that the administration has not done enough in containing the menace of cattle grazing, the Bello led administration has in the last one year arrested 589 hawkers, 25 cows and 51 sheep and prosecuted nine herdsmen.

During this short sojourn, several FCT schools have won several laurel both national and internationally. This is in addition to cleaning exercise of the education sub-sector. In the process about 565 substandard schools were closed down.

Even as his administration clocks one year in office, the minister has commenced a hyperactive process of completing road projects that have been stalled for years now. Some of these projects include: the 10-lanes Airport (Umaru Musa Yar’Adua) and Kubwa (Murtala Muhammad) Expressways, which is expected to be completed by December 2016; Circle Road around the 3-Arms zone; trumpet interchange at the Airport junction by Bill Clinton Drive; Inner Southern Expressway, which is currently witnessing rapid development.

However, tangents connecting City Centre, Gwagwalada and environs have been completed and are currently being used, while potholes in the city centre are also receiving well-deserved attention. Also, completed are the rehabilitation of M20 road leading to the popular Utako Market Park, road shoulders along the Shehu Shagari Expressway in Maitama District and Ring Road 1.

Irrespective of what critics might say, the Minister‘s pace and style of administration in the last 365 days, which has witnessed phenomenal strides in the area of provision of infrastructural facilities as enunciated above deserves applause from Nigerians. Take it or leave it, Bello has kept the faith in the discharge of his ministerial assignment and has thus justified the confidence reposed in him by his principal, President Muhammadu Buhari.