Home » News » LEGAL: Governor Jibrilla    described  the existing relationship   between the Executive  and the  Judicial  arms of government  as  cordial.

LEGAL: Governor Jibrilla    described  the existing relationship   between the Executive  and the  Judicial  arms of government  as  cordial.

The Governor stated this at a  brief ceremony  marking the commencement of the 2016/2017 Legal year held at the  premises of the state  High court of Justice  complex Yola.
Governor Jibrilla explained that  in view of the good  synergy existing  between the Executive arm  and the Judiciary, his administration  enhanced  the funding of the Judiciary, stressing that the  Judiciary  is the  last hope of a common man.

"The  relationship between the Executive arm of Government  and the  Judiciary  in Adamawa state  is like a  one family "he added.

He also  revealed that the present government  has provided  official  vehicles  to Judges and  Magistrates in order to  perform  their official responsibilities effectively.
While  assenting the amended  Bill for area courts justice as    earlier  passed  by the state  House of Assembly  into Law, the Governor reiterated the commitment of his government  on Transparency, Accountability, Justice and  Fairness to all. 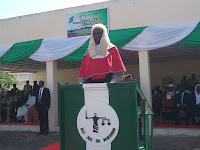 Declaring the Legal year open, the Adamawa state  Cheif Judge  His Lordship Hon. Justice  Ishaya Kida Banu   thanked Governor Muhammed Umar Jibrilla for his  kind disposition to the  Judiciary, saying that  without  which nothing  would be  achieved and urged the  Governor to  continue to lend his listening ears in the course of the year ahead.

The  state Cheif Judge  enjoined the Judicial staff to rededicate  themselves to the responsibility  and duties to the state and the nation, explaining that the  jail delivery committee under the  chairmanship of the Honourable  Chief Judge visited  some prison yards within the  state  for the purpose of de- congesting the  prisons, adding that  146 inmates  were released  while 50 other  were granted Bail.

He however  commended the  Governor for  ensuring that the  new court complex was renovated well equipped and put to use which he said is a  remarkable achievement on the  Judiciary. 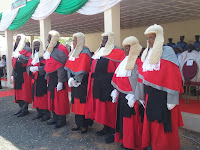 Earlier in his remarks the  Adamawa state  Attorney -General and Commissioner for Justice Barrister Bala Silas Sanga explained that  about Ninety -Five percent of the Adamawa state  Laws  were reformed.
The state Attorney  - General also lamented that the state government shows great concern  about the inmates in prisons  that were awaiting  trials, pointing out that the administration of  criminal  justice  will be review and  send to the House of Assembly for  authentication.

Barrister  Sanga  said the  Adamawa state Government  intends to  renovate all the courts which were destroyed  as a result of insurgency across the state.
He however said that the computerisation  of the Judiciary  will also receive the attention of the Government  in order to make the judiciary  effective and efficient as the Judiciary  is the last hope of a common man.