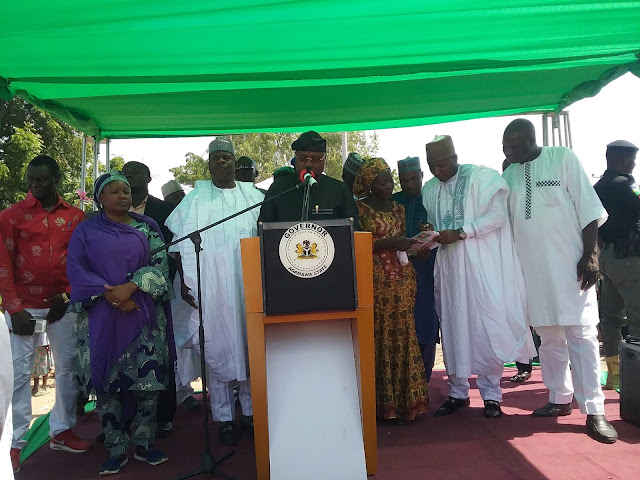 In continuation of his administration's commitment to provide basic social amenities to the citizens of Adamawa state , Governor Muhammed Umar Jibrilla have  Flagged off the  construction of  2.7 kilometer of road network in Numan Township.

Speaking  at the occasion, Governor Muhammed  Umar Jibrilla said  " today's even of is to fulfilled  our campaign promises to the people of this area,  we promise to   provide   basic social amenities such as Roads, Health Care delivery, Agriculture, Qualitative  Education Poverty alleviation among others."

He also  revealed that  the construction  and rehabilitation of  Numan General Hospital  will soon commence to ensure adequate health care services and to  change the entire  Numan  Federation. 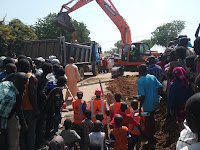 He also  stated that  his government will  reintroduce the  special  assistant's scheme in order to empower  youths and  women in the state to  be self reliance.

In his goodwill message at the occassion, the Chief of staff government house Alhaji AbdurRahman Abba Jimeta  said  the present administration under Governor Muhammed Umar Jibrilla intents to construct  over Ten roads network across Numan metropolist in the  year 2017 and 2018  after being captured in the Budget.

Also in her remarks the Honourable Commissioner ministry of  Works Barr. Lilian Nabe Kayode explained that the 2.7 kilometres of  road  construction in  Numan is the first  phase of  infrastructural development  in the  area which was awarded  to the reputable company TRIACTA Construction Nigeria Limited with a duration of two Months.

She also  appealed to the  people of the area  to give all their necessary  support and cooperation to the contractor  as well as to  the state government in  order to achieve the  desired  results. 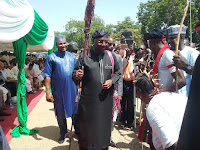 During the  ceremony Governor Muhammed Umar Jibrilla has been  honoured by the Bwattiye  community and decorated with the  Bow and Arrows  as a  mark of appreciation  to the Governor for his emmence contribution to the development of Numan  Federation  and Bwattiye  community in  general.