In continuation with the road construction project in the state, the Executive Governor of Adamawa State, His Excellency Muhammad Umaru Jibrilla has today, 10th November, 2016 Flagg off the  construction of Pariya – Wuro Bokki Road in Girei Local Government Area.

The Pariya – Wuro Bokki Road is one of the oldest roads that linked Adamawa state with the Federal Republic of Cameroon.

The road was dilapidated for decades, which affected agricultural production and other commercial activities that will boost the revenue generation for the state.

In her welcoming address, the honourable commissioner Ministry of Works, Barr. Lillian Stephen Nabe urged the  residents along the  construction site to give maximum cooperation to the construction company to complement Governor Jibrilla’s effort.

Mrs. Nabe said  contract was awarded to Raycon & Co (Nig) Ltd will be completed in 24 months. 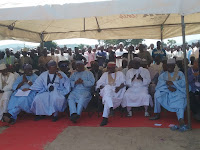 In a separate godwill messages, The member representing Girei/Song  in Adamawa State House of Assembly, Hon. Mohammed Mutawali thanked governor Bindow for extending the ongoing road construction in the state to his constituency. He affirmed that if the road is  completed, it will boost the economy of his constituency and generate more revenue to the state. It will equally foster trade relationship with the neighbouring Cameroon Republic.

The Chief of Staff Government House, Alhaji Abdulrahaman Abba Jimeta emphasis that during their campaign tour in 2015, about 95% of the places they campaigned in, the electorates requested for road construction in their area in order to boost their agricultural production and other commercial activities.

The former Vice President, Alhaji Atiku Abubakar applauded Governor Bindow for his laudable projects in the state. He promised his hundred percent support to the present administration. He called on the governor to fulfilled all the campaign promises he made to people the state.

The Governor says that his administration is committed to bring even development to all the LGAs in the state.