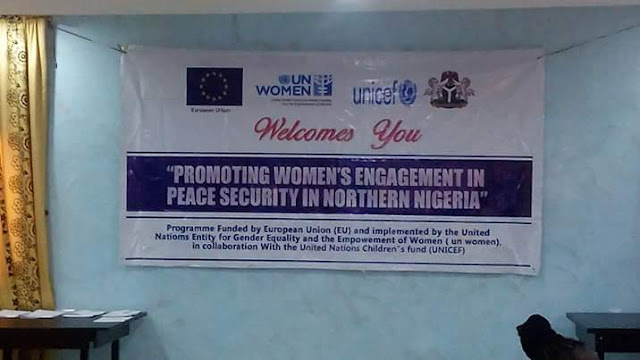 In a bid to promote peace and security in Nigeria, the Nigeria Association of Women Journalists NAWOJ, has been charged  to be ambassadors of peace journalism. Mrs Ifeyinwa Omowole, the National President of NAWOJ gave the charge yesterday, at the the opening of a two-day workshop for female journalists in  North-Eastern Nigeria held in Yola, the Adamawa state capital.

The workshop which was tagged “Promoting Women’s Engagement in Peace Security in Northern Nigeria” drew its participants from the three insurgent hit  areas; Borno, Yobe and Adamawa States.Omowole maintained that women should ensure positive outcome from promoting security, peace and stability in any community.

“Women from all levels should be involved in security and peace making because of their capacity building in promoting security and peace in the community and the society at large,’’ She stated.The NAWOJ president  urged members to change their style of reporting and always put the interest of the country first as well promote gender related issues.

Dr Orhi Titus, the UN Women-Gender Technical Adviser based in Adamawa, said that the purpose of the training was to build capacity of female journalists in reporting gender related issues.According to him, some of the topics to be discussed at the workshop would include issues on women, peace and security as well as safety and security in reporting. He said that about 46 journalists from three states of Borno, Adamawa and Yobe were participating at the training.Titus disclosed that the programme was funded by European Union and implemented by the United Nations entity for gender equality and empowerment of women in collaboration with UNICEF.