Home » News » NEWS: Adamawa State Ministry of Women Affairs and Social Development Holds a Press Conference to Commemorate the 16Days of Activicism for 2016

NEWS: Adamawa State Ministry of Women Affairs and Social Development Holds a Press Conference to Commemorate the 16Days of Activicism for 2016 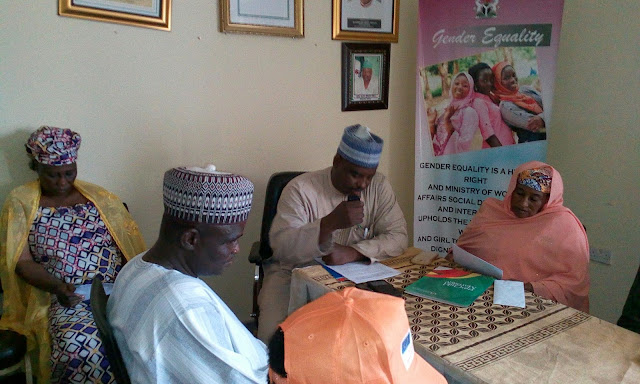 02/12/2016
By Catherine Philip Jelani & Aisha Saad
Adamawa State Ministry for Women Affairs and Social Development organized a Press Conference to commemorate the 16 Days of Activicism on Gender Based Violence against Women and Girls in the State.  The Press Conference was held at the Ministry's Conference Hall with all the Donor Agencies as well as the Management of the Ministry in attendance.
While briefing the Press, the Honourable Commissioner, Alhaji Aliyu Bello Tola announced the theme of the 16 Days of Activicism as thus; " ORANGE THE WORLD END VIOLENCE AGAINST WOMEN AND GIRLS".
He continued that the "16 Days Activicism is a period earmarked for Immense and dissemination or Information backed with action to stymie the dastard acts of Violence Against Women and Girls around the world by unscrupulous elements. Civil Societies, Government and International Organizations do galvanize to utilize the period to address and factor ways and channels to combat Gender Based Violence Against Women and Girls, the bane to their Human Rights and emancipation in the scheme of affairs". 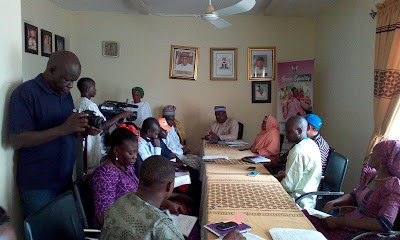 Furthermore, he explained that the period is a proposal to call for global action to increase world wide awareness and to design opportunities for discussions about challenges and proffer solutions in support of the Civil Society Initiative known as the Women Global Leadership Institute created in 1991. And, it is being coordinated by the Center for Women Global Leadership, the United National Secretary General's campaign, Unite to End Violence Against Women was Birthed in other to facilitate the actualization of the 2030 Agenda for Sustainable Development Goal.
However, it is in this regards that the State Ministry of Women Affairs and Social Development has commence its awareness campaign and action with the theme;  " ORANGE THE WORLD END VIOLENCE AGAINST WOMEN AND GIRLS " adding that women they say are the bedrock of the society.
Rounding up, he implored the people of the State to come out and support the campaign against Gender Based Violence in other to achieve a Gender Based Violence free society.
09:35
Adamawa Daily Reports
News
Email ThisBlogThis!Share to TwitterShare to Facebook