Home » News » News:"Nawogians are our Mothers and we will cooperate and work together " Say Brigadier General Benson.

News:"Nawogians are our Mothers and we will cooperate and work together " Say Brigadier General Benson.

The Nigeria Association of Women  Journalist had on 29th November 2016 paid a courtesy visit to army headquarters 23 brigade Yola.

The visit which was lead by by Nawoj Chairperson Mrs Kate Aliyuda of Adamawa Television Yola. She  said the aim of the visit was for the association to dentified themselves with the new Commandant. She also added that it deemed it fit for Nawojians to associate and thank the army for the fight against insurgency in the State.

The Commander of the HQ 23 Brigade, General Brigadier Benson Akinroluyu who welcomed the Nawojians by appreciating their coming and thanked them for identifying themselves with his office.

Benson who said he is highly delighted to see Female Journalist around and mothers are our source of joy always. "Please go and discriminate information to people in a proper way" Benson said.

He urged Nawojians to continue doing the good work they are known for as mothers in the society. He concluded by saying that the army alone can't do it but with the help of people like female journalist he know they will progress. 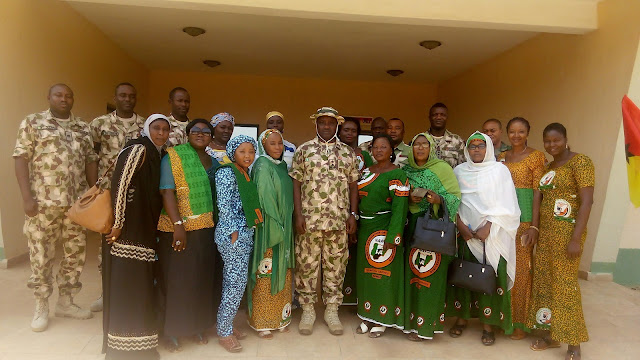