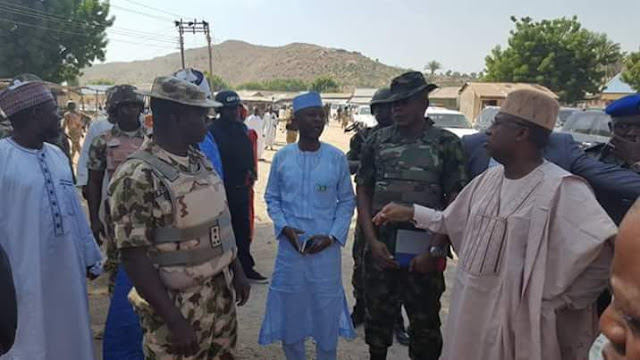 Adamwa State Governor, Senator Muhammad Umar Jibrilla Bindow has visited the scene of the recent Madagali twin bomb blast that killed over 50 people and injured many others.

The Governor, who made the visit, Monday morning, symphatised with the people of Madagali over the loss of lives and properties in the area, and promised that prompt assistance will be made available by the Government to aid the swift recovery of the affected people.

Bindow further assured that strategies were being stepped up to ensure the safety of lives and properties, and emphasized the importance of security vigilance, information sharing and cooperation with the security agencies.

He then stated that the Government, the Council of Islamic Ulamas and some religious clerics will meet to deliberate an acceptable strategy to curb the use of girls with hijabs to perpetrate such heinous act.

"It has become imperative to look at the use of Hijab in Madagali and other high risk areas. All the attacks carried out here were by young girls in Hijabs. The Government Security Agencies and the Islamic clerics will discussed the use hijab in this high risk areas", Bindow explained.

The Governor was received by the Chairman of the Local Government, Hon Yusuf O C, Madagali State Assembly Member, Hon Emmanuel Tsamdu and some elders and was accompanied by his Chief of Staff, Abdulrahman Abba Jimeta, State Commissioner of Police, State Director of SSS and some top Military Officers. 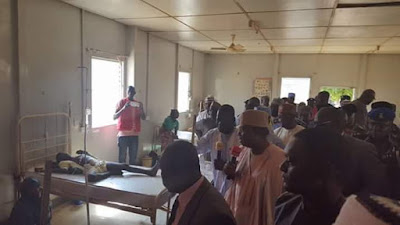 Bindow made a stop visit to the survivors of the bomb blasts who are receiving treatment at the General Hospital Michika.

The Governor went round the wards where victims were admitted, reassuring them of government's commitment to provide adequate care for their full and speedy recovery.

The Chief Medical Director of the hospital, said they had earlier received 78 injured persons but lost four of them to serious injuries and the 74 other survivors are stable and responding to treatment.

The State Emergency Management Agency have also been deployed to the hospital, providing feeding and materials assistance to both the patients and their relatives.