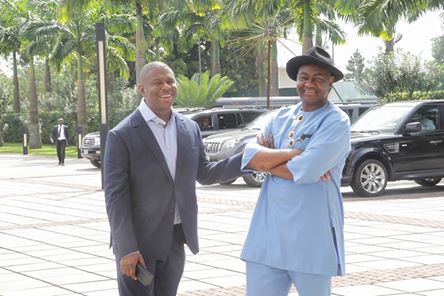 The All Progressives Congress (APC) in Rivers State has hit out hard at Governor Nyesom Wike and his Peoples Democratic Party (PDP), asking them to bury their heads in shame over the ceding of oil wells belonging to Rivers to neighbouring Bayelsa, Abia and Akwa Ibom states. Rivers APC in a statement issued on Sunday in Port Harcourt berated Wike and the state PDP for attempting to shift the blame to former governor Chibuike Amaechi over the unfortunate development.

The party said in the statement signed by the State Chairman, Chief (Dr.) Davies Ibiamu Ikanya: “We are shocked by Wike and PDP’s brazen attempt to shift the blame to Rt. Hon. Amaechi via a statement issued by one Jerry Needam titled, ‘Oil Well Politics: Accept your empty promises, PDP tells Amaechi, APC’. This simply shows how shameless both Wike and Rivers PDP leadership can be. It was Nyesom Wike and his confused PDP members who collaborated with then President Jonathan Goodluck to cede oil wells belonging to Rivers State to neighbouring Bayelsa, Abia and Akwa Ibom states to show their disdain for Rivers State and her people. Instead of hiding their faces in shame, they have the audacity to remind Rivers State and her people at this period of their golden age celebration, of how they wickedly connived with the then PDP-led Federal Government to deny Rivers State her entitlements as an oil producing State just because of their hatred for Amaechi.”

Rivers APC advised Wike and PDP not to celebrate their ugly feats in ruining the State that was being made Rivers of Gold under the watch of Amaechi to Rivers of Blood under the watch of Wike. It lambasted Wike, Rivers PDP Chairman Felix Obuah and others who have made politics to lose its meaning in Rivers and are dissipating their energies on a vain plot to pull down Amaechi, who did all he could to give Rivers State purposeful leadership and is now serving Nigeria at the Federal level in the capacity of Minister of Transportation.

“But we are glad that good people of Rivers State are too intelligent to be swayed by misguided elements that never meant well for the State,” the statement said. It added: “It is a pity that some PDP leaders who are desirous to milk the Rivers State treasury dry are attempting to compare Wike’s administration with that of Amaechi, forgetting that you cannot compare light with darkness. Amaechi is far ahead of Wike in all aspects of life except, of course, in killing and using blood to sustain oneself in power.

“Finally, we wish to reiterate that no amount of sponsored protests against security agencies and the Presidency will shield Wike from answering for his crimes against the people of Rivers State and democracy. Wike is not above the law and must prepare to submit himself to the law in the fullness of time.”