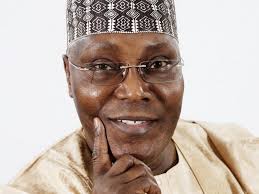 The office of Atiku Support  Group (ASG)  in the Spirit of a New Year celebration issued a Press Statement to our reporter, appreciating the courage and resilient nature of Nigerians despite the economy recession currently experiencing in the country.

The New Year Message is to all Nigerians. Its salutes the courage displayed by every good citizen of Nigeria as the year winds up; "We appreciate the resilient spirit and persevering heart of all the people of this great country. We acknowledge the sacrifices made by all well meaning Nigerians. We admired the unwavering and abiding faith of every patriotic citizens of this country on the project Nigeria."

Mr Mark Wosi  Director General of the group said that 2016 was a challenging year for every body in the country; "We faced one of the worst economic crisis and social chaos ever in the history of Nigeria. The country witnessed a steady rise in inflations, the Exchange rate was at its worst ever high in Nigeria, we saw our local currency which is our pride nose diving against the world dominant currencies.The problem of  cattle rustling in the North went hay-wire at the course of the year. The challenge of the Fulani herdsmen and Farmers that touched almost all the states in the federation, the Niger-Delta militant attacks on oil pipelines that almost left the economy prostrate, the persecution of some Principal Officers of the National Assembly which soured the relationship between the Executive and Legislature and slowed down the progress and speed of governance. The Arms deal shenanigans that opened a can of worms and raised a lot of dusts which are still to be settle" he lamented.

He continued that ;"the kidnappings of some prominent Nigerians including students and the subsequent demands for ransom, lost of lives of some Nigerians in the process, the lists went on and on. "No doubt, it was a year with many sides, a year with mixed feelings, yet Nigerians were very strong in spirit maintaining a strong will and overcoming  mentality. This has gone a long way to keep us more united and resolute on our resolve to build the nation that we've all crave for".

He said that as we approach the year 2017 in hope for a better life and outcome, let us not waver in our commitment to our fatherland; "The year 2017 is a very crucial one for us as a people because far-reaching decisions will be made, there will be alignment and re-alignment of forces as we work together to shape Nigeria for the good of all.

Wosi however maintain that Nigerians must seek for those things that unite the country than those things that divide us as a people; "Our strength lies in our unity. our diversity in tongue and in culture is a testimony of our uniqueness as a people destined together for greatness. We must work for the peaceful co-existence of all the people of this country and ensure harmony among ourselves without allowing any divisive forces and external influences to divide us" says Wosi.

"Abhor all forms of violence, work for the total integration of all opinions and respect the position of everyone without resorting to destructive activities. Let us imbibe the culture of according respect to human dignity and value our individual differences.We salute the people of the North east who has never given up despite the activities of the Boko Haram in the area. They chose to love their fatherland and accept their fate while waiting for  a better tomorrow to which all of us are working to make it a reality." He added

He assured in confidence that the year 2017 shall be a better year for everyone  as we all keep on with the struggle to entrench a true and lasting democracy in Nigeria.
15:23
Adamawa Daily Reports
Special Report
Email ThisBlogThis!Share to TwitterShare to Facebook