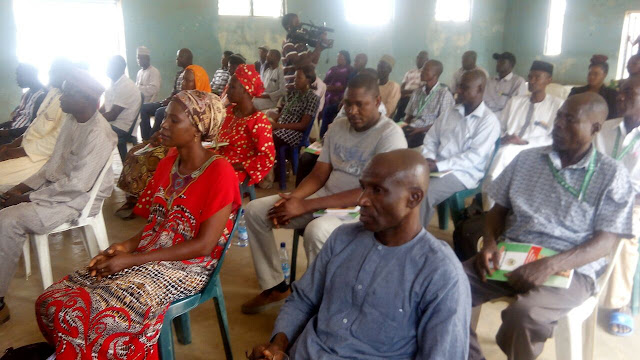 Adamawa State Federal Honourable Commissioner for the Commission, Tpl David A. Garnvwa  informed newsmen in Numan that fifty persons has been recruited and are now being train as demarcation team for the present and subsequent phase of the EAD in the state noting that immediately, they get fund they will deployed them to other LGAs.

He buttressed that the significance of the EAD exercise to them as a Commission cannot be overemphasized as its goes beyond the conduct of 2018 census adding that they have plan to establish and maintain a national and locality list house for future censuses and surveys in line with the mandate of the Commission under section 24 of the third schedule of the 1999 constitution.

Tpl Garnvwa maintained that it was their expectation that what would be required for future censuses will be updating and can be used by NIPOST to generate zip codes for the country.

Consequently, the Commissioner noted that the commission will be deploying sophisticated technology in carrying out the EAD. He maintained that they have designed method to achieve the full Geographic Information System (GIS) compliance.

He stressed that high resolution satellite imagery will be used to ensure that no area is left undemarcated or duplicated. Stating that the methodology they adopted will not allow room for the creation of imaginary EAs and any attempt to include non-existent households and building in the EAs would be detected.

Moreover, he said that the Personal Digital Assistance (PDA) will be used in capturing spatial data and estimate EAs during demarcation. He noted that this scientific approached to demarcation will help them eliminate human elements as the process is capable of detecting human errors and prevention of manipulation. He accentuated that already they have put in place adequate logistics for effective deployment of personnel and materials during the Enumeration Area Demarcation exercise.

However, Tpl Garnvwa pointed out that the EAD exercise about to carry was not the proper census but it was just to divide the country to small geographical areas to facilitate the enumeration. He stressed that the Commission will only count the people found in such units, therefore, would not determine the population figures of the administrative unit. Hence, he noted that given the fact 2018 census will be biometric based, the Commission would try to capture the facial impression and finger prints of persons physical. So, any hope of manipulating the EAD cannot be realized as only persons physically will be counted and biometric.

Therefore, he appealed to the state and local government councils, traditional rulers and security agencies to help the commission carry out the EAD to ensure the unfettered 2018 census. In the meantime, he implored them to also assist their staff with adequate securities and accommodations.

Finally, Tpl Garnvwa charged the demarcators on training to be sincere in their duties as whatever they do is between them and their God. So they should live up to the expectation of the Commission.

In his remarks, the Adamawa State Honourable Commissioner of Information and Strategy, Comrade Ahmad Sajoh, assured the Commission that they have absolute support of the State government. Adding that the state is ready to render them any form of assist that would be require during their period of exercise.

He stressed that since His Excellency, the Executive Governor of Adamawa State, Senator Mohammed Umar Jibrilla has intensively dedicated for the success of the exercise, he believed they would succeed because the commitment of the governor is the entire commitment of the state.

Comrade Sajoh implored the entire people of the state to give hundred per cent support for the exercise to succeed. He charged them that as the Federal Honourable Commissioner have rightly stated this exercise was not designed to give advantage to one group over another. It is an exercise that is supposes to give them a firm foundation and a very good basis upon which they would lay their activities when the time for the census proper comes. So they should get it right from now.

Then, he tasked the demarcators to be sincere and committed to the oath of office they have taken and do the right things, stating that it was the will of God for them to be in the locality they are today.

Also speaking, the Chairman of the Adamawa State Planning Commission, Engineer Nuhu, emphasized that the exercise was not a population census. He said in whatever you do or plan to do, you must have a foundation, so this exercise is the foundation of the census. Thus, he made a passionate appealed to the general public most especially the elites to help in sensitizing the populace about the importance of the exercise in order for them to support it.