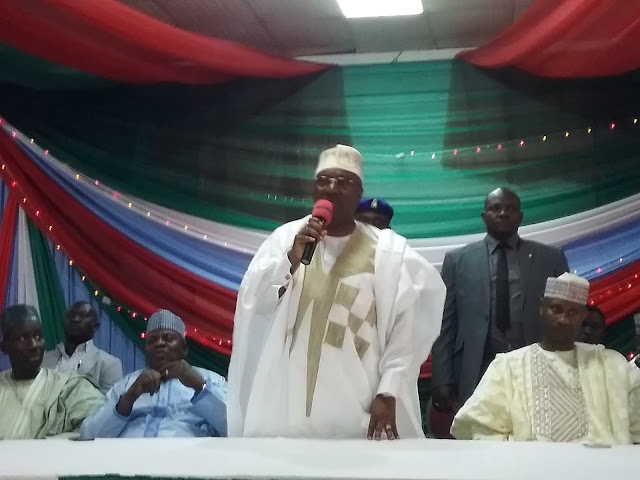 People of Gombi  Local Government Area have been called upon to be united as one big family for the overall development of the area.

Governor Muhammed Umar Jibrilla who made the call when the communities from Gombi Local Government  paid him a solidarity visit at Government House Yola recently.

The Governor stated that without  unity, tolerance and harmony, no any development could be achieved in the area  despite  the notable  personalities  from the area.

Governor Muhammed Jibrilla  assured the delegation that his government is determined to  provide democracy dividends to the electorates at the grassroots ,explaining that the primary  responsibility of  any elected leader is to ensure that people were provided with basic social amenities by the  government.

He also  assured the Gombi people  that  his developmental  Train  would soon reach the  area as witnessed by  other local government areas of the state  despite the meager resources  and current  economic  recession being faced by the  present administration.

The Governor however  commended the  security agents for their efforts in maintaining peace and security in the state  and called on the people of Adamawa state to pray for President Muhammadu Buhari for his  quick recovery while receiving  treatment abroad.

In his remarks, the Chief of staff government house Alhaji AbdurRahman Abba Jimeta had enumerated some of the remarkable achievements recorded by the present government under Governor Muhammed Umar Jibrilla  as well as fulfilling his electioneering campaign promises to the electorates of Adamawa state within shortest period while in office.

Alhaji AbdurRahman Abba Jimeta also appealed to the stakeholders of Gombi to shun their differences and put the  local government  at hearts as to move the  area forward.

Also in their  separate remarks, The Honourable  Member representing Gombi constituency in the state House of Assembly  Honourable Rufai Umar ,Council Chairman Alhaji Yakubu Hamza,District Head of Guyuk Alhaji Shuaibu Barde and Mr Dimas Ezra  had all spoke on the Unity and Tolerance among the community.

The delegation also assured the Governor that shun all their differences in order to attained progress  and development of their  area.

The  delegation however  endorsed Senator Muhammed Umar Jibrilla  as their sole candidate for 2019 Gurbernatorial election.