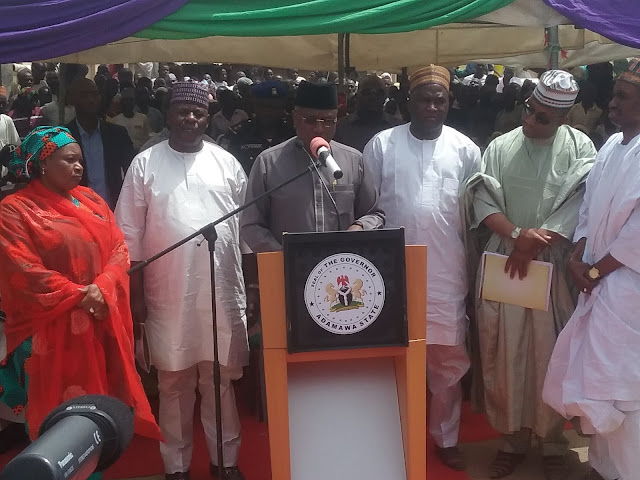 Song community have been called upon to  remain resolute and committed towards the development of the area.

Governor Muhammed Umar Jibrilla who made the plea during the Flagg-off  for the construction of Song -Gada Mayo Bridge which was first contracted by the colonial era in 1928.

The Governor  assured the people of Song that his Administration would continue to transform Towns and Villages of Adamawa state  as promised during electioneering campaigns, stressing that the Gada Mayo Bridge  is One of the  promises  he made .

He called on the people of the area to support his government in order to provide  more Democracy dividends to the electorates.

He also urged them to  cooperate with the  construction company and assured that  the Song indigenes  would be  the beneficiaries  as Ninety  percent of the  workers will taking from the area.

In her remarks at the occasion, the Honourable Commissioner ministry of Works Barr.Lilian Nabe Kayode explained that the Four Span Gada-Mayo -Song Bridge  was awarded to Triacta construction company Nigeria Limited at the cost of Five Hundred Hundred and Eighty Five Million Naira with a completion period of Four Months.

She urged the coomunities  to give maximum to the construction firm  in order to provide  quality work.

Also in his goodwill message, the Chief of staff Government house Alhaji AbdurRahman Abba Jimeta explained that Governor Muhammed Jibrilla was in the area to fulfil  his campaign promises to the people  and called on the electorates to  support the present government under Governor Muhammed Umar Jibrilla so as to move the state forward.

The  representative of Triacta construction company of Nigeria  had assured that the work would be completed within the  stipulated period of time  and assured that quality  work  would be maintained.