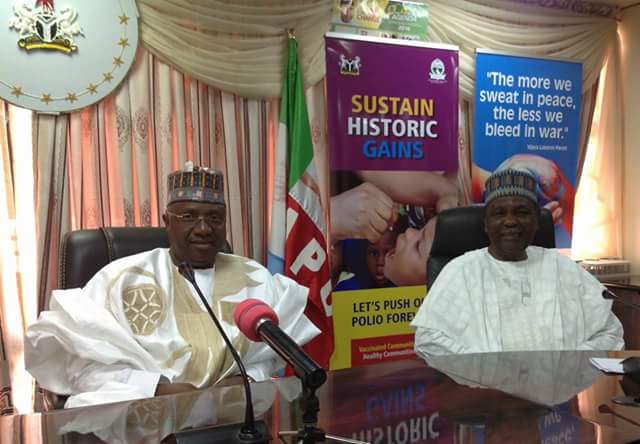 The  former military Head of State  made the commendation when he  led a delegation of body of conveners to a courtesy visit on Governor Muhammed Jibrilla  at Government House Yola.

General Gowon had told Governor Jibrilla that the delegation was in Adamawa state  for the annual prayer ""Nigeria prays"" a prayer rally which is intended for the North Eastern states in order to seek blessing and swift  intervention of God on Nigeria's  problems and  hope for the  better nation.

According to the Elder statesman, Governor Muhammed Jibrilla has done a  wonderful performance to ensure people of Adamawa state feel the positive  impact of governance,and  describing it as unprecedented in recent years.

The  former military ruler  said the  country cannot survive without the  support and cooperation of both the  Muslims and Christians faithfuls  hence the Two religion preaches peacefully  coexistence and unity  among its followers.

He explained that the prayer project  was started in 1996 when the country headed into anarchy  as a result of  fear and possible  disintegration of the nation""If we may get all Nigerians prays the n definitely  God may answer our prayers""he added.

He also  thanked the Governor  and government of Adamawa state  for the hospitality accorded the delegation since their  arrival in the state and for the success of the  rally.

Responding, Governor Muhammed Umar Jibrilla thanked the  former military Head of State Retired General Yakubu Gowon  for the visit and for the prayers  offering to the  nation which the Governor mentioned as timely.

The Governor also  appreciated the efforts of General Gowon for his perciviarance  in keeping the  country One and pray God to sustain the  former leader.

Also in his presentation, the Honourable Commissioner ministry of Information and Strategy Comrade Ahmad Ibrahim Sajoh (MNIPR )highlighted some of the remarkable achievements recorded by the present administration under Governor Muhammed Umar Jibrilla by transforming Adamawa state within shortest period while in office.

Sajoh also explained that  prayers is the only solution to  Nigeria's  problems ,he however said that Governor Jibrilla has been  awarded as the most  outstanding Governor of the  Year for his Roads  infrastructure development  among other Governors in the country.