News:Sajoh Inaugurates 8 Man Committee to Monitor and Document Bindow Administration's Projects and Achievements in the State 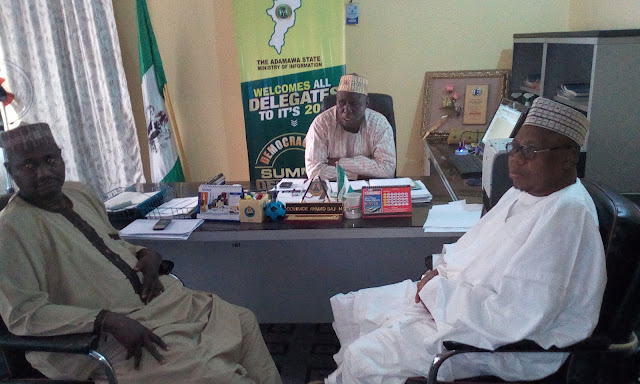 An Eight  Man Committee to Monitor and Document the achievements of the present administration under Governor Muhammed Umar for the past Twenty One Months  have been inaugurated.

Performing the inaugural ceremony, The state Commissioner of  Information and Strategy Comrade Ahmad Ibrahim Sajoh (MNIPR )says the committee was saddled with the responsibility to go round all the  developmental projects being executed by the present administration under Governor Muhammed Umar Jibrilla  in the last Twenty -One Months while  piloting the affairs of Adamawa state.

According to Comrade Ahmad Sajoh,  the task of the  committee is to produce a  written Documentary as well as to  compiled Videos and Photo Albums /Exhibition so as to show case the developmental giant strides of Governor Muhammed Jibrilla during his shortest period as Governor of Adamawa state.

The Commissioner also  said that  members of the committee has been  selected based on merit and their  wealth of experience and  professionalism.

In his remarks at the  ceremony, The  Permanent Secretary ministry of Information and Strategy Alhaji Adamu Musa Kallamu charged members of the committee  to  work  as a team  in order to achieve  success  during  their  assignment.

Mallam Ibrahim  Buba also assured that members of the committee would  embibe the  good spirit of team work to justify the confidence reposed on the members.

The  committee is expected to submit it's report within Two weeks  from the date of the inauguration.