Home » News » News:The Adamawa State Government to Enhance  its IGR in order to  Survive the  Implementation of 2017 Budget.

News:The Adamawa State Government to Enhance  its IGR in order to  Survive the  Implementation of 2017 Budget. 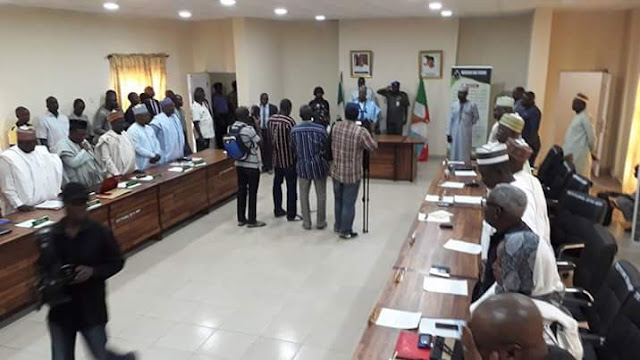 The Adamawa State Government  is to enhance  its Internally Generated Revenue  (IGR ) in order to  survive the  implementation of 2017 Budget.

According to the SSG  the Council has discussed alot of issues  and reached at a number of resolutions for the progress and development of the state, explained that the EXCO has discussed on the 2017 Budget  with regards to  enhance the Internally Generated Revenue in order to survive the implementation of 2017 Budget.

He also explained that the present administration  is to  construct  more roads with  International standard and drainages  across the state.

The  Council also discussed on the  employment of  Education  Secretaries as submitted by the Commissioner of Education to the Council.

Dr Umar  Bindir further announced that the  Council has also  deliberated on the  deployment of Paris Club Fund to pay the Local Government Staff  salary  arrears  in the state. He pointed out that the  Council also  received a report  by the State Attorney - General and Commissioner for Justice  on the panel that has visited the Adamawa State University Mubi to conduct further  investigation on how to stabilise the University.

He however  revealed that the Council had also received  a Memo submitted by the Ministry of  Higher Education, Science and Technology through the  Commissioner Alhaji Rufai Ahmed Abubakar on the need to  get contributions  of people who had a knowledge and  the best practices in raising  resources  to secure  scholarship to Adamawa state  indigenes  for the Year 2017 and 2018.

The  Council also received a report  on the implementation of a white paper on the  appointment of  the new Executive  Chairman of the  State Board of Internal Revenue.

Also commenting the Honourable Commissioner Ministry of Works Barr.Lilian Nabe Kayode explained that the EXCO had  approved  the construction of Four Span Song Bridge at the cost of N585,000,000 (Five Hundred and Eighty Five Million Naira)  which  was awarded to Triacta Construction Company Nigeria Limited with a  completion period of Four Months.

She also announced that the Council also  approved for the  construction of Girei  Street in DouGirei  quarters.