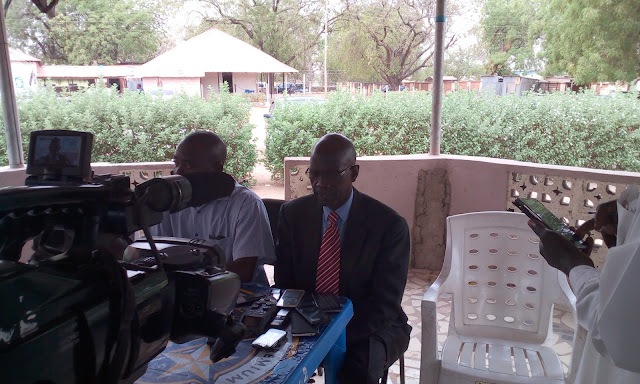 Following the reaction of the State Attorney General and Commissioner of Justice Hon.  Bala Sanga as well as the general public on the resent pending bail granted to Nglari on health grounds by Justice Nathan Musa of High Court 1 here in Yola,  the Council to Nglari Barr.  Obed Wadzani told Journalist in a press conference this morning that Bala was absent in court yesterday the 27th of March 2017 because the court had received a letter from the prison saying that he is not fit to appear in court due to ill Health.

" He is supposed to be present in court under ordinary circumstances because it is a criminal case,  now the court received a letter from the prison to excuse his presence in court according to them for his medical condition which they said they've received information from the personal physician of Bala Nglari when he came to examine him in prison and also the medical personnel in Yola Prison " says Wadzani.

He explained that because Bala is already a convict,  he can only be granted bail only on special circumstance which in his case is a health challenge. All documentary evidence that showed his medical reports were attached and submitted with the bail application before the court yesterday.

How ever,  he challenged the office of the Attorney General of the state  where he said that it has no right to contradict the medical reports that were attached to their application instead,  a medical personnel or a medical consultant should have been contacted on the issue. " in law, for you to counter a documentary evidence or document submitted,  you have to bring document to counter it or bring somebody who is a medical Doctor who also have the knowledge of medicine to say that these medical records that you have attached are neither true or don't have the fact you have deposed to" he added.

Wadzani had emphasize that the letter that came from the prison explains that Bala was examine by two medical doctors and they said that his blood pressure is high and he cannot be able to stand trial.

According Wadzani,  it is wrong to say that Nglari's bail granted yesterday was either fraudulent or solely based on the letter that came from the prison, it is based on the exercise of the discretion of His Lordship, the Judge that is in charge of High Court 1.
He concluded that the case is still in court.