Home » News » News:Stakeholders Forum on GEOB In the State Meets on Passage of Bill

News:Stakeholders Forum on GEOB In the State Meets on Passage of Bill 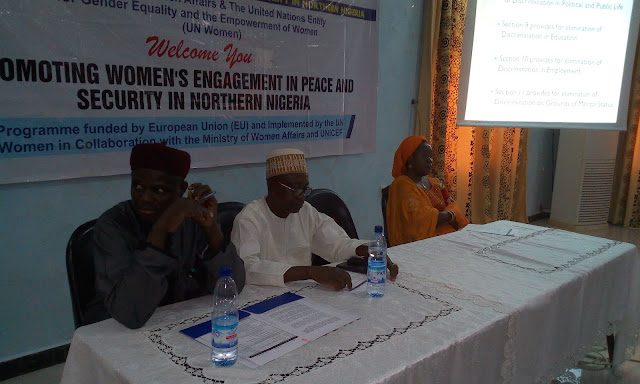 It could be recalled that last December 2016, the Adamawa State Ministry of Women Affairs in collaboration with UN Women , EU and UNICEF organized a  3 Day vigorous Workshop that brought different caliber of participants in order to provide inputs on how to successfully prepare and present a bill on Gender Equal Opportunity for the state. The participants included; Religious Leaders, Ministry of Justice (Lawyers),  Lecturers, State Planning Commission (Planners), Media, CSOs, NGOs,  Women Societies,  FOMWAN,  CAN, Security Agents etc.

Subsequently,  on 22nd of December 2016, the same stakeholders conducted an advocacy March to the State House of Assembly and submitted the Bill for its reading and passage.

It is how in this regards that today being the 22nd of March, 2017 that the Ministry for Women Affairs and Social Development in collaboration with UN Women had organised a one day workshop on Gender and Equal Opportunity Bill at Homtel hotel here in Yola so as to discuss progress reports and challenges.

Declaring the workshop open, the Hon. Commissioner, Ministry for Women Affairs and Social Development who was represented by the Permanent Secretary of the Ministry Mr. Festus Bolanke, said the Ministry supports the domestication of  Gender and Equal Opportunity Bill for the protection of women, men, and people with disabilities for equitable development in the state.

He called on all stakeholders, to work together and encourage the passage of the Bill so as to enhance equal opportunity for all and foster the protection of our women and girls, and the development of the state.

There was paper presentation  by Mr. Amo Yusuf on GEOB and it’s challenges which crippled the passage of the Bill thus; Lack of public enlightenment, lack of proper engagement of relevant stakeholders, religious considerations, cultural consideration factors and lack of political will from government and key stakeholders.

How ever, the State Planning Commission too was well represented by the Permanent Secretary of the Commission Mrs Justina Sebastian Patrick.

In the course of the workshop, the stakeholders deliberated and agreed on passing of the new amended Bill.