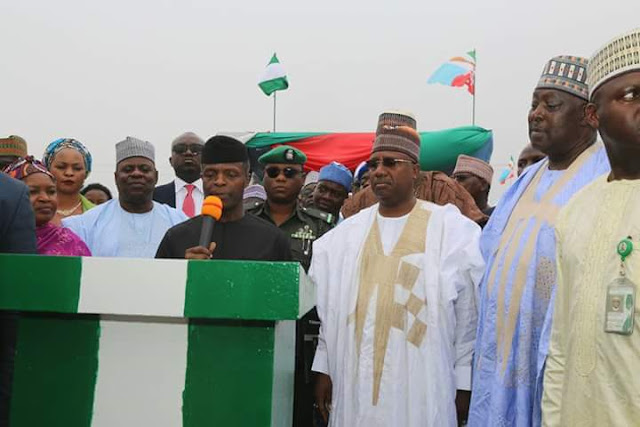 The  Vice president  made the commendation  while commissioning  Fifty - Nine completed Roads Projects  being constructed by the present administration under Governor Muhammed Umar Jibrilla  in  less than Two years while in office.

He confessed that the changes recorded by Governor Muhammed Umar Jibrilla  has come to stay in Adamawa state for the better.

He thanked Lamido Adamawa Dr Muhammadu Barkindo Aliyu Mustafa  for confining  him with the tittle  of JAGABA ADAMAWA. 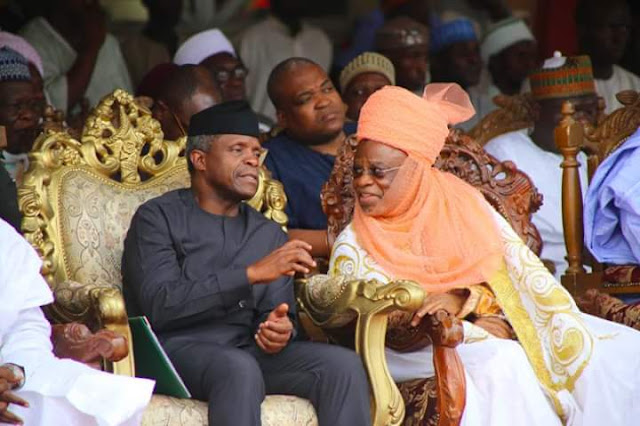 Osibanjo said that the  Federal Government has introduced a lot of empowerment  programmes for the youths in the   country  so as to alleviate  poverty and  creat  wealth  to the citizens of the  country,  and had also  thanked the  Government  and people of Adamawa state  for the hospitality accorded him  while on his official  visit to Adamawa state.

In his speech, Governor Muhammed Umar Jibrilla  acknowledged the efforts of  President Muhammadu Buhari for his  zeal and commitment in  maintaining peace and security in Adamawa state  and the entire North East region and for liberating the region from the menace of Boko Haram  insurgency.

Governor Muhammed Jibrilla  explained that  Transparency and Accountability is the cardinals principles of his administration, and  expressed  appreciation to  President Muhammadu Buhari for  stablizing  his government  financially  through  his magnanimous intervention  of Bail Out funds and Paris and  London  Clubs  refunds.

The Governor also  reiterated and assured that the  commitments  of his administration to provide  quality  infrastructure, social services, and Poverty reduction through  empowerment  programmes  of APC  change mantra.

He also  commended  Traditional rulers in the state  for maintaining peace and security in their  domains.

Earlier in  her remarks, the Honourable Commissioner Ministry of  Works Barr.Lilian Nabe Kayode explained that the  agitation  of the construction of  Faro road was started in 1994  by the previous administrations, pointing out that the present Government under Governor Muhammed Umar Jibrilla  have constructed and completed Fifty -Nine  Roads of 169 Kilometers  and Two Bridges, stressing that about 112  Roads currently  under various  stages of completion  across the state.

In their goodwill messages, The Secretary to the Government  of the Federation  Engineer Babachir David Lawan, FCT Minister Mallam Mohammed Musa Bello, Senator Binta Masi Garba, Senator  Silas  Zwingina, and former Governor  Wilberforce  Bafte Juta have commended Governor Muhammed Umar Jibrilla for his  developmental strides in developing Adamawa state  and assured  Federal government  support and cooperation  at all times ,"" We assured  you that the  federal government  intervention  and support to continue with your developmental strides in  Adamawa state "" SGF added.

He also  disclosed that all the Trank  A  federal government roads  would be  rehabilitated  before the end of the tenure of the present government  of President Muhammadu Buhari, and urged the people of Adamawa state to join  hands in order to move the state forward.

The occassion was well attended by prominent  personalities  within  and out side the state . 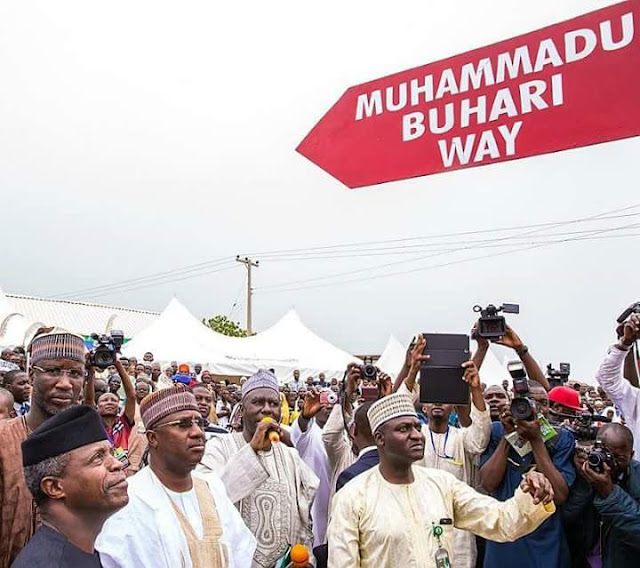 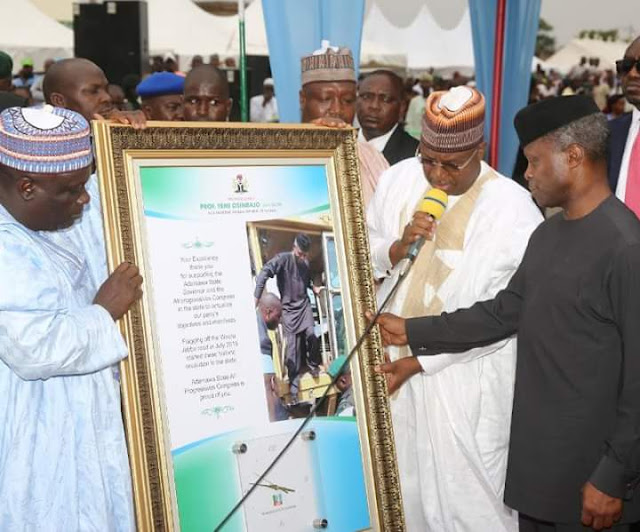