NEWS:GOV. BINDOW RECEIVES AN INVESTIGATIVE REPORT ON MDGs PROJECTS IN THE STATE 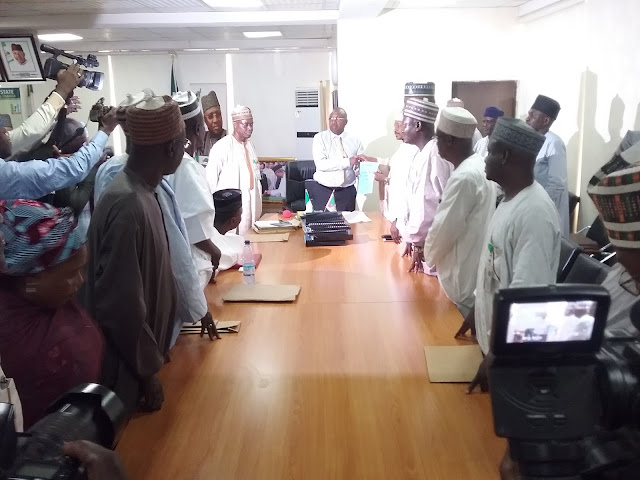 Over Four Billion Naira ( N 4,000,000,000,000)has been recover as a fraud by the Alfa Belel Panel of Inquiry to investigate the activities of the  Mellinium Development  Goals  (MDGs)  in Adamawa state.

Submitting the report  to Governor Muhammed Umar Jibrilla, The  Chairman of the  panel  Honourable Alfa Umar Belel said the  committee went round all the Twenty-One Local government areas of the state  where MDGs projects claimed to have been  done  and found  out that the Contractors in collaboration with the  consultants, project Managers and project Coordinators  have defrauded the Adamawa state Government  huge amount of money, pointing out that  most of the projects were poorly done or poorly executed by the  contractors.

Honourable Alfa Umar Belel explained that about One Thousand  Five Hundred ( 150 ) contacts were awarded to  various contractors  across the state  to execute  viable  projects which  includes construction of Blocks of classrooms, Health Care  centers, public Toilets and Water projects.

The  committee chairman  thanked the Governor for giving them the opportunity to serve  the state  and the confidence reposed on the members of the committee as well.

While receiving the  report, Governor Muhammed Umar Jibrilla  had commended members of the committee for doing a wonderful  job.

The Governor also  reiterated  that his government will  not tolerate any form of corruption and  assured that the report  will be carefully  study and  directed the state Attorney General of the  state for other necessary  action.