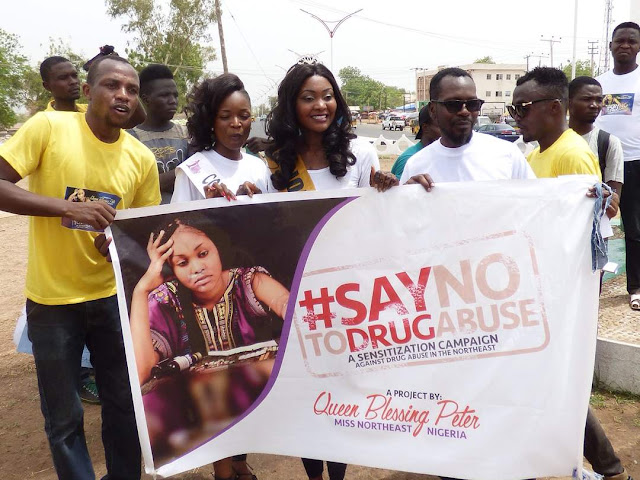 The rally which began from 11AM at Luggere Primary School in Jimeta had a massive response from artistes, actors, TV presenters, sportsmen, security agencies and other young men from the community.

The objective of the rally according to the Miss Northeast, was to make families and society listen to those prone to drug abuse as the first step towards helping them deal with the issue and lead healthy and safe lives.

Youths sported placards displaying information about the disastrous effects of intoxication on individuals and society. Placards with messages against illicit addiction and abuse and appeals for protection of young men and women particularly the teenagers were also on the display.

Shehu Dankolo, the Head of Councilling and Rehabilitation unit NDLEA Adamawa command who spoke on behave of the state commandant commended the beauty queen to continue doing such in order to cleanse the society from the dangers of drug abuse.

“When you have sensitization programs like this, it would go a long way to sensitize our teaming youths, the parents and the other stake holders, especially when we take in cognizance the dangers of drug abuse”

“Nigerian is becoming a sort of dumping ground for narcotic that is sensitization programs like this is very important” he said.

He also said that a research in one of the norther universities have shown that there is an increase in abusive drug intake which has made many to take their lives, while others misbehave in the society; causing social vices like rape, arm robbery, poor performance in educational institutions, snatching of ballot boxes during elections.

Mr. Shehu concluded by encouraging the beauty queen to continue organizing sensitization programs like this, teaming up with other queens from the northeast region and beyond to come up with “enlightenment campaigns so that it can sink into our youths” on the danger of drug abuse to the health of individuals.

In the same vein, a supporting queen Miss Comely Taraba State, Gloria N. D. Pajo challenged the youths to shun abnormal drug intake and focus on building themselves with positivism so as to achieve their dreams.

Miss Northeast in her appreciation and closing remark maintain that she is not stopping the campaign anyway soon but appeal to the Nigerian youths to stand and say No To Drug Abuse.

“I am calling upon stake holders and communities to continue to improve the lives of everyone blighted by drug abuse by integrating security and public safety with a heightened focus on health, human rights, and sustainable development.” The Beauty Queen said.