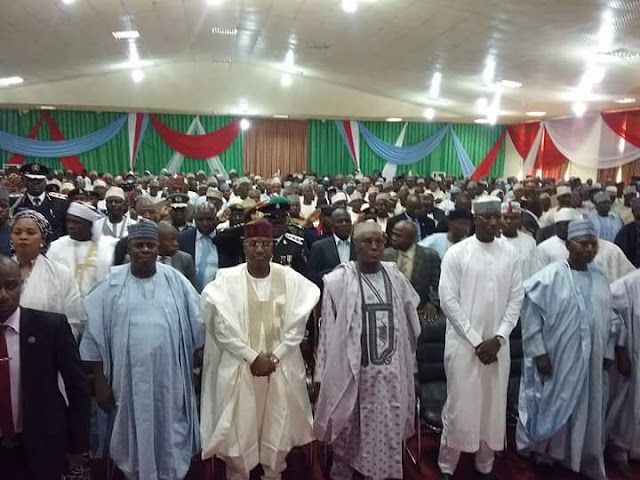 In a mammoth gathering to mark the Democracy Day in Adamawa State, the State's Banquet Hall in Government House Yola was filled to its capacity with Men and Women who are known to be the Political, Religious and Traditional Leaders, Senior men of the State converged to celebrate the historic day.

After watching a 1:30 minutes documentary, the Senior men of the state in respective of political Party affiliation had on separate times commended the Governor and called on the people of the state to return back Governor Muhammadu Umaru Jibrilla Bindow to continue as a Governor come 2019.

The Former Vice President of Nigeria and the Chairman of the occasion, Alhaji Atiku Abubakar said that the  Governor had broken the development history of the state with his remarkable development giant strides and has endorsed him to come back for a second term as the Governor.

``My support for Bindow is due to his selfless development of this state. This state has not recorded this giant stride in the past and by this, the Governor has set a record..." He said.

``To me, by the time we reassemble here next year, we will not feel the existence of any political party here in Adamawa. Some of us are happy with this administration because of our love for the state...``As you can see that all my investment are here In Adamawa because I don’t have any other place like Adamawa,’ He said.

Abubakar who is an All Progressives Congress (APC) stalwart not only in  the state but in the country at large added that since the history of the state, this is the first time that the state corruption index has become the lowest in the country.

However, the  Former Governor of the then Gondola, Ambassador Wilberforce Juta (PDP) Said Bindow is doing what they were not able to do in the State. Given the construction of Sheleng Road as an example which is 85% completion that his regime failed to do but wonder at the feat the present Governor is achieving  in making Sheleng community to feel the impact of democracy.

"Bindow is indeed a wizard and he deserves a second term return." He said.

Professor Jibril Aminu who was a ranking Senator during the PDP regime applauded the Governor saying that Adamawa State is now fortunate to have a Governor who is having much concern for the state and is really working to prove that.

The Lamido of Adamawa and the Grand Patron of Tapila Pulaku, HRH Dr Muhammadu  Barkindo Aliyu Mustapha simply asserted that they "saw and are convinced" Bindow deserve to be a Governor up to 2023 as his work is every where for all to see.

Their messages centered of urging  Bindow to continue to develop the state for the future of the upcoming generation, adding that the impact of his development was unprecedented.

All of them declared their support for Bindow for 2019, saying there was no vacancy in Adamawa Government House.

In his remark, Bindow thanked the people of the state for their support. He commended the State House of Assembly for their cooperation towards the achieve development of infrastructure in the state.

He assured the people of his continues development of the state, urging Local Government workers to be patient, as efforts were on the way to clear their salary arrears.