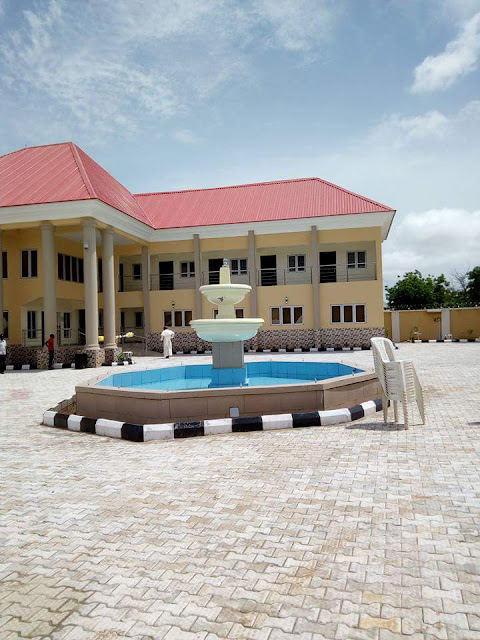 The Governor of Adamawa state,Senator  Mohammadu Umaru Jibrilla Bindow has on Wednesday inaugurated a multi million Catholic Secretariat in Yola.

During the inaugural and dedication of the admin secretariat,  he called on  the people of the state to shun politics of religion sentiment during the coming elections of 2019.

Bindow Stated that his administration had made remarkable improvement in basic infrastructure, adding that all his projects were to be benefited by the generality of Adamawa people.

He urged the people to disregard aspirants who would use religion differences as part of their campaign to the people.``I believe that I was voted into office by both Christians and Muslims and my projects are not only for Muslims but for the generality of our people." ``I will advice you to disregard any aspirant that will preach religion during electioneering campaign because such people are 419.

``You can see that the roads I have constructed are not only used by Moslems but they are for every body.

``I am happy that the six Bishops in this arena have prayed for me and already endorsed me for the 2019 so that I can continue with the good works I am doing.

``Therefore, there is no vacancy in government house in 2019, people can go and contest for Senate ad other positions and not Governorship,’ Bindow said.

The Governor also solicited prayers for the ailing President Muhammadu Buhari.He also appealed to the clergy to pray for him and the state to have peace for development.

According to him, I am appealing to all men of God to pray for our ailing president for his speedy recovery, pray for Adamawa and my self so that there will be peace and development.

Earlier, Bishop Dami Mamza, the Catholic Bishop of Yola diocese said that he spent N85 million for the construction of the secretariat. Mamza said that the project was supervised by him as prudence was his watch word during the execution of the project. He said that the funds were coursed from the offerings from the congress.

While thanking the members for their understanding, he expressed commitment to be more accountable to the church. He thanked the governor for honoring his invitation as his attendance was a mark of encouragement to the church.