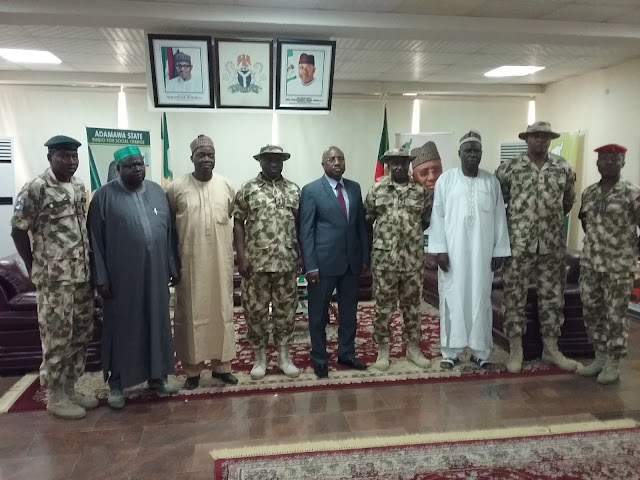 Security Agencies in Adamawa state  have been commended for their patriotism, commitment and  sacrifice  in maintaining peace and order  in the state.

Governor Muhammed  Umar Jibrilla  made the commendation when he  granted in audience the newly posted Brigade Commander of the  23rd armoured brigades Yola, Brigadier General Bello  A. Muhammad who  paid him a courtesy visit  in his office at Government House Yola. He said the  Military has done well and exhibited  professionalism by ensuring that peace and  security  are regained in the North Eastern part of the country, and commended President Muhammadu Buhari for his determination  and commitment in the fight against  insurgency in the North East sub-region.

According to Governor Jibrilla,  Adamawa State  is now peaceful and calm, assuring the  new Brigade commander  of his administration's  support and cooperation  at all times.

Earlier, the  newly posted Brigade Commander of the 23rd armoured brigades Yola ,Brigadier General  Bello A. Muhammad  had told the Governor that the  primary responsibility of the  Military is to defend the Territorial integrity and  also to protect lives and properties of the citizenry  as well as to ensure that peace and security  are being maintained.

Also in his vote of thanks, the  Out-going  Brigade Commander  Brigadier General Benson Akinruluye  thanked  Governor  Jibrilla  for his  humility, kindness and  understanding  he received  during his service  period in Adamawa state and that same  would be  extended to  his predecessor.